More Than a Feeling: How the Nineteenth-Century British Novel Reformed the Passions 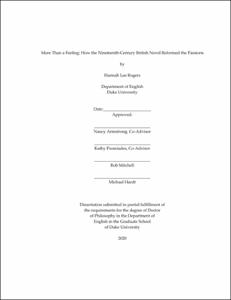 By the time of David Hume and Adam Smith, as A.O. Hirschman famously tells us, the early modern passions had been rehabilitated as a creative force, one driven by economic interest. From the turn of the nineteenth century onward, however, the passions returned with a vengeance — as indicated by the works of Jeremy Bentham, Thomas Malthus, and the Brontë sisters. What we now call “the emotions” had suddenly slipped out from under the control of individual reason and become a force of nature. As such, they could be held responsible both for keeping the individual alive and for the species’ ability to prosper and expand in number. Michel Foucault has offered perhaps the clearest articulation of how the century that followed developed new forms of government that both taught individuals to manage themselves by observing disciplinary regimens and regulated the unruliness of entire populations by means of biopolitical policies. But while, like Hirschman, Foucault links the redefinition of sexuality and how behaviors and effects were classified and managed directly to the emergence of industrial capitalism, neither he nor Hirschman consider the novel instrumental in their respective accounts of the passions. Novels, as the self-anointed discourse of personal experience, were ideally positioned to respond both critically and creatively to the disruptions of daily life that began in the late eighteenth century. In the decades that followed, I will show, the novel successively updated the causes and effects of emotional experience to accommodate the transition to an industrial society from an agrarian way of life supported by commerce and early colonization.

From Jane Eyre to Daniel Deronda, the novel features a protagonist whose biographical destiny depends on a form of yearning well in excess of the prevailing social classification system. This unnamable sense of belonging elsewhere is indeed so in excess of then existing codes of conduct and self-expression that it escapes the confines of the individual and pervades each habitat it enters with a sense of lack and constriction. The natural principles Charles Darwin first discovered during his landmark Voyage of the Beagle gave him the grounds, by 1872, to conclude that just as any species, man or animal, must physically adapt to its environment, so too must its feelings. Darwin understood that these affects — a term I use for feelings that have not been codified as one of the then recognized emotions — allow the species to develop new relations among themselves to enable survival. Over the century, the novel followed this same principle perhaps more so than any other form of writing, as it sought to alter the basis of human feeling to accommodate the material conditions of existence. My introduction explains how the novel carried out this project by capturing and reforming feelings in excess of accepted social roles and reworked both feelings and roles to form emotional ties capable of sustaining domestic life: first, during the early decades of the nineteenth century as inherited land lost its status as the coin of the realm, then in the economic crisis called the Hungry Forties, and finally during the period when England’s economy shifted from the English countryside to the imperial metropole.