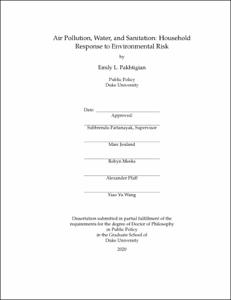 In Chapter 1, I ask how air pollution exposure drives consumption behaviors and impacts health outcomes. I examine this question in the short term--asking how behavior and health respond to a large, yet transitory, spike in ambient air pollution--as well as over time--considering the responses to average ambient air pollution levels over a period of 19 years. I leverage variation in air pollution resulting from forest fire emissions in Indonesia between 1996 and 2015 to generate short-term exposure spikes and average exposures over time, and I combine these exposures with four waves household and individual-level survey data. I implement a cross-sectional, difference-in-difference analysis to estimate the immediate effects of an unexpectedly severe forest fire season in 2015, finding increased fuel demands among the most-exposed households as well as declines in lung capacity among emissions-affected children. I extend my analysis across the panel using an instrumental variables approach to estimate consequences of average exposure over time. I find that households facing higher average ambient air pollution exposures are more likely to utilize clean cooking fuels such as LPG. Even with these behavioral adjustments, more-exposed individuals face significant reductions in lung capacity. In line with existing literature, I find negative health implications resulting from short-term exposure shocks; however, my analysis demonstrates that these respiratory consequences are not fleeting, particularly in areas that experience elevated average ambient air pollution levels.

In Chapter 2, I turn to environmental risks posed by limited access to improved sanitation technologies to examine how social influences impact household sanitation decisions. Using three waves of data collected immediately before, a few months after, and a few years after a randomized latrine promotion campaign in rural Orissa, India, I evaluate the extent to which social influences impact sanitation choices. I find that a ten percentage point decrease in neighbors' open defecation reduces a household's likelihood of open defecation by 3-4 percentage points. The sanitation intervention decreased open defecation in the short term; however, this treatment was less effective in neighborhoods with higher rates of open defecation due to strong social effects. Disaggregating social effects by gender, I find that both women and men respond to sanitation behaviors among male neighbors in the short term and female neighbors in the longer term, perhaps because men have more control over initial latrine purchasing decisions while women are more influential in sustaining latrine use over time.

Finally, in Chapter 3, I expand on my analysis of social influences and sanitation practices and examine how households make decisions to contribute to collective action for sanitation. In this chapter, I analyze data from an experimental public goods game I designed and implemented among over 1500 households in rural Bihar and Orissa, India. I randomly assigned each of the 70 villages in the sample into groups that are either homogeneous or heterogeneous by gender for game play. In the context of rural India, individuals are more likely to frequently interact with and make decisions in front of others of the same gender. Thus, splitting the groups in this way provides a proxy for peer or social groups. Participants chose how much to contribute to improved sanitation by making decisions in the game that are associated with actual sanitation and hygiene choices they face every day. Payoffs were awarded after each round, and payoff amounts were dependent on both individual contributions and aggregated group contributions, generating a setting in which the benefits participants received were connected. Comparing the game behavior among participants in groups that were homogeneous and heterogeneous by gender, I find evidence that contributions to collective action for sanitation are higher in gender homogenous groups. Female participants drive this difference, and it is more distinct in the first round of game play. I also find evidence that preferences for improved sanitation as elicited during the experimental games are reflective of actual improved sanitation practices at the household level.