Lilacs: Digital Songs and Poems for Voice, Clarinet, Percussion, Electric Guitar, and Electronics, and Ethical Considerations for the Design and Documentation of Wearable Technologies, Responsive Textiles, and Haptic Sound Art 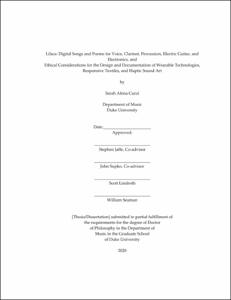 This dissertation contains two parts: an original album for voice, clarinet, electric guitar, hand percussion, and electronics; and an article analyzing ethical use of responsive technologies in art, music, and design.

Lilacs: Digital Songs and Poems for Voice, Clarinet, Percussion, Electric Guitar, and Electronics is a musical work in twelve sections inspired by the experience of losing a loved one to cancer. Themes of healing, hope, loss, and grieving appear in several of the songs and poems. The texts are original, except portions of “The Promise” which were excerpted from Isaiah 43:2-5. The musical sections comment on the ideas in the main poem, “the words that should not be said,” which is broken into four pieces. My music and text evoke an emotional process that is difficult to navigate: how to display a socially acceptable public face while privately grieving. Which words are “safe,” and which words should be “held close to [our hearts]”?

In some ways, my work is similar to a 19th-century song cycle, which usually involved solo or ensemble voices and instrumental accompaniment (especially the combination of voice and piano). Like song cycles in the 19th century, Lilacs is meant to be cohesive; the songs are meant to go together and comment on one another. In the context of this form, my choice to mix voice and choir is unusual, though there is a precedent in Schubert’s The Lady of the Lake. My choice to electronically overdub my own voice certainly departs from standard song cycles, which were most popular in a day where electronic manipulation was impossible.

Lilacs was conceived in an electronic format and is designed to be heard at home or on headphones, a listening experience which is not standard for song cycles or classical music as a whole, and relies on electronic devices as mediators of acoustic intimacy. The mix of styles, electronic format, and navigation of multiple music styles in Lilacs also suggest that this work is an avant-garde digital concept album in the same vein as The Beatles’ Revolver, but the fragmented narrative provided by my original poems are reminiscent of theatrical monologue. Taken together, the elements of my work suggest that Lilacs asserts its own genre. The final track, “Branches,” is submitted with the written dissertation, and can be heard at https://soundcloud.com/sacurzi/12-branches.

In my article, I analyze four case studies of interactive art to show that existing projects can inform the ethical design, use, and promotion of current responsive art and commercial projects. While responsive technologies incorporate fields as diverse as science, music, fashion, medicine, art, and textiles, critical discourse on the cultural meaning of wearable electronics and responsive textiles has been limited, with most literature and scholarship focusing on the technological advancements themselves. As a result, creators and consumers of wearable technology engage with increasingly “modern” garments but only rarely interrogate their use.

I analyze the interactive artwork of Yuri Suzuki, Anna Biró, Alyce Santoro, and Joanna Berzowska. First, I demonstrate the ways in which these artists disrupt dominant power dynamics of gender, ecology, disability and globalization; based on these analyses, I then develop a table of ethical considerations for the design and documentation of responsive textiles and haptic sound art. I intend this table be a practical tool for creators of responsive technologies in art, design, and commercial applications. I hope that my research will affect decision-making regarding photographic styles for the purposes of advertising or (in the case of artists) public documentation, which currently promotes thin, white, cisgender women. My work also has tangible benefits for commercial applications, where ethical sourcing and labor can protect companies from expensive lawsuits, loss of income from damaged brand image, consumer boycotts, and even embargos such as the United States suspension of trade with Bangladesh after the Rana Plaza factory collapse.