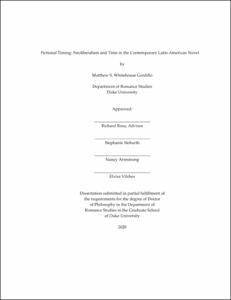 My dissertation, “Fictional Timing: Neoliberalism and Time in the Contemporary Latin American Novel”, studies recent developments in the Latin American novel to better understand the relation between economics and time in contemporary Latin America. I analyze Alberto Fuguet’s Las películas de mi vida (2002) Jorge Volpi’s No sera la Tierra (2006), Pedro Mairal’s El año del desierto (2005), Diamela Eltit’s Los trabajadores de la muerte (1998) and Mano de obra (2002), as well as Barataria (volume 1 published in 2012, volume 2 published in 2013) by Juan López Bauzá, to argue that at the heart of the Latin American novel’s examination of the shifting signifier that is “neoliberalism” (Brown 20), we find a return to matters of time and temporality. Since the early 1970s, Latin America has provided a site for political experiments in reshaping the dynamics between the social and economic spheres, thus between citizens and the market. The region became the third great stage for the neoliberal model, as well as the first systematic experiment of neoliberal reforms during Pinochet’s dictatorship (Valencia 478). It has become all but commonplace to credit changes in technology, debt reforms, privatization, austerity, and global markets for a distinctively contemporary experience of time as the acceleration and compression of lived experience that ensures a predictable future (Harvey 1989; Lazzarato 2012). While taking this now commonplace view into account, I conclude that contemporary Latin American novels insist on the heterogeneity of temporal experiences. Each chapter explores these diverse times at work within neoliberal rationality, discourses, practices, and subjectivities.