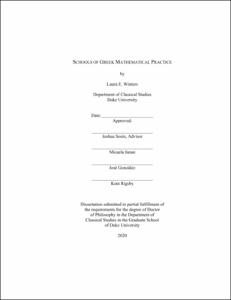 This dissertation revolves around a central observation that, although the methodological differences among Greek mathematical writings are striking, these differences do not lie primarily along lines of subject matter or time period. Almost all mathematical works fall clearly into one of two distinct sets of methodological conventions, which are observable from the classical period through late antiquity, in all disciplines. Because these sets of conventions transcend time and subject, and instead seem to be followed consistently by certain authors who interact among themselves in the manner of philosophical traditions, I have interpreted them as schools of mathematical practice.

I have named the schools “systematist” and “heurist” according to the characteristic epistemological orientation of each. The systematist school, of which Euclid is the paradigmatic author, is motivated by the goal of a generalized and systematic treatment of mathematical information. Features of this method include strict conventions of presentation, the idealization of mathematical objects, a preference for universalizing propositions over unique problems, and a general reluctance to work with specific numbers, physical tools, or measurements. The heurist school, in which Archimedes, Heron of Alexandria, and Ptolemy worked, is oriented toward the discovery and development of effective methods of problem-solving. Presentation is less structured and usually more personalized, specific solutions are allowed to stand implicitly for universal principles, and physical phenomena, measurement, tools, and numerical calculations are more commonly included and addressed.

Over the course of this work I will demonstrate the existence of these two schools with a thorough survey of Greek works of theoretical mathematics; I will outline the schools’ characteristic features and histories, and show how the influences of philosophical movements and intellectual social networks affected their practices. Each of the four chapters addresses the ways in which the methods of each school were expressed in the four most common mathematical disciplines: geometry, arithmetic, astronomy, and music. The chapters will show not only the evidence for the divisions between the schools in each field, and how they developed, but also that both schools made only minor adaptations to their methodologies according to subject matter. In fact, it can be shown that even when they departed from more traditional mathematical disciplines into areas of research such as mechanics and catoptrics (i.e. fields of science and technology that use mathematical tools but are not essentially governed by mathematical principles), the epistemological and methodological differences between the systematist and heurist schools were retained.

The conclusion will show, first, that the systematist/heurist divide was fundamental and pervasive throughout the history of Greek works on mathematics and related disciplines, but that the divide was largely obscured by the activities of late antique scholars. Second, the conclusion will provide a brief sketch of how the combination of late antique transmission and modern reception of Greek mathematics have affected not only the perception of ancient mathematics (giving undue emphasis to systematist texts, despite evidence that the heurists were the larger school), but also the development of modern mathematical methods.