Dietary Choline, Inflammation, and Neuroprotection Across the Lifespan 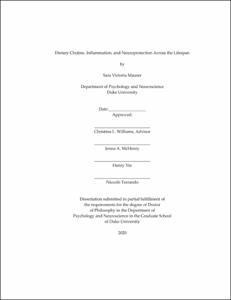 The cholinergic system is intricately linked with hippocampal memory. As well, choline is anti-inflammatory in the brain and periphery (Terrando et al., 2011; Rivera et al., 1998). However, few have analyzed the anti-inflammatory properties of choline as an alternate means by which cholinergic manipulations affect hippocampal memory throughout the lifespan. The first aim of this dissertation work sought to determine if dietary choline supplementation protects against the deleterious effects of air pollution in the developing brain. Pregnant mice were given a high-choline diet (approximately 4.5x the choline chloride in the control diet) or a synthetic control diet. As well, dams were exposed to a series of diesel particulate (DEP) or saline vehicle sessions throughout pregnancy. Mice were sacrificed and tissues were collected on embryonic day 18. The activation state of microglia, identified by quantifying morphology using Iba1+ immunohistochemical staining, was examined in the dentate gyrus of the hippocampus (DG), the paraventricular nucleus (PVN) of the hypothalamus, the basolateral amygdala (AMY), and the parietal cortex (PCX). As expected, we found that DEP led to increased microglial activation in the fetal DG in males. Choline supplementation partially prevented this increase in activation. Interestingly, these effects were region-specific: the opposite pattern is seen in the PVN, and no significant diesel effect was seen in the AMY and PCX. These findings suggest that prenatal choline supplementation throughout pregnancy may protect the fetal hippocampus against the neuroinflammation associated with air pollution. To analyze whether the acute effects of dietary choline seen prenatally also occur in adulthood, adult dietary choline supplementation alongside the tibial fracture model of post-operative cognitive dysfunction (POCD) was used. POCD occurs when increased neuroinflammation due to peripheral surgery leads to impairments in cognition. Differences were found in almost hippocampal-dependent behavior, astrocytic activation, and cell proliferation. Differences were time point-specific. In the hippocampus, astrocytic activation, cell proliferation, and hilar granule cells all increased 1 day after surgery, and these increases were blunted by dietary choline. An increase in hippocampal young neurons was found 2 weeks after surgery. However, both were blunted by choline supplementation. At both time points assessed, tibial fracture impaired novel object recognition performance, and dietary choline rescued these impairments. As well, dietary choline supplementation did not mitigate the increase in anxiety-related behavior – specifically implicating hippocampal actions of the nutrient. Because the hippocampal-dependent memory impairment and rescue is not time point-specific, but the neural effects of tibial fracture are each specific to a certain timepoint, the mechanisms of behavior are likely different at each time point. Building upon aim 2, aim 3 explores if perinatal choline supplementation can act via “programming” of the neuroimmune system in development to prevent POCD in adulthood. Perinatal choline supplementation prevented POCD and neuroinflammation due to peripheral surgery, but did not protect against increases in young neurons or hilar neurons. Perinatal choline nutrition, in addition to its already-known neuroprotection, is additionally protective against POCD and its associated neuroinflammation in adulthood. Taken together, this body of work concludes that dietary choline supplementation at various administration dates is protective in neuroinflammatory models in behavior and brain.