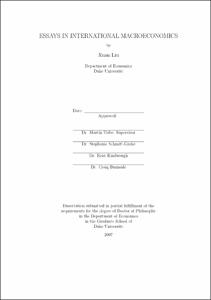 View / Download
642.3 Kb
Date
Author
Liu, Xuan
Advisors
Uribe, Martin
Kimbrough, Kent
Burnside, Craig
Schmitt-Grohe, Stephanie
Repository Usage Stats
699
views
648
downloads
Abstract
This dissertation consists of two essays in international macroeconomics. The first essay shows that optimal fiscal and monetary policy is time consistent in a standard small open economy. Further, there exist many maturity structures of public debt capable of rendering the optimal policy time consistent. This result is in sharp contrast with that obtained in the context of closed-economy models. In the closed economy, the time consistency of optimal monetary and fiscal policy imposes severe restrictions on public debt in the form of a unique term structure of public debt that governments can leave to their successors at each point in time. The time consistent result is robust: optimal policy is time consistent when both real and nominal bonds have finite horizons. While in a closed economy, governments must have both nominal and real bonds, and have at least real bonds over an infinite horizon to render optimal policy time consistent. The second essay uses a dynamic stochastic general equilibrium model to theoretically rationalize the empirical finding that sudden stops have weaker effects on outputs when the small open economy is more open to trade. First, welfare costs of sudden stops are decreasing in trade openness. The reason is that when the economy is more open to trade, the economy will have less volatile capital, which leads to less volatile output. In terms of welfare, when the small open economy is more open to trade, the welfare costs of sudden stops will be smaller. Second, sudden stops may be welfare improving to the small open economy. This is because when the representative household is a net borrower in the international capital market, its consumption will be negatively correlated with country spread. Since utility is a concave function of consumption, it must be a convex function of country spread. That is, when the country spread is more volatile, the mean utility is higher. The two findings are robust: they hold with one sector economy model, and two sector economy models with homogenous capital and heterogenous capital. In addition, this paper shows that a counter-cyclical tariff rate policy is not welfare-improving.
Type
Dissertation
Department
Economics
Subject
Business cycles
Welfare
Time Consistency
Optimal Fiscal and Monetary Policy
Permalink
https://hdl.handle.net/10161/210
Citation
Liu, Xuan (2007). Essays in International Macroeconomics. Dissertation, Duke University. Retrieved from https://hdl.handle.net/10161/210.
Collections
More Info
Show full item record