Getting into Poverty Without a Husband, and Getting Out, With or Without 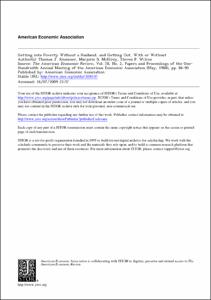 View / Download
219.5 Kb
Date
Authors
Kniesner, MB McElroy with Thomas
Wilcox, Stephen P
Repository Usage Stats
273
views
253
downloads
Abstract
Interest in the poverty of U.S. women with children but without husbands stems from numerous sources including (i) the secular growth of this demographic group-up 110 percent since 1970 to a total of 6 million (almost 20 percent of all families) in 1985; (ii) the high poverty rates of these women -34 percent in 1985; (iii) the overrepresentation of blacks in this group-about 42 percent in 1985; (iv) the increasing fraction of children raised in these families-over 16 percent in 1984 vs. 6 percent in 1959; and (v) the size of government transfers to this particular group-almost $17 billion for income support under the AFDC program alone in 1985.1 Our research uncovers some important racial similarities as well as stark differences in how women enter and exit single-mother poverty status.
Type
Journal article
Subject
poverty
young single mothers
Permalink
https://hdl.handle.net/10161/2100
Collections
More Info
Show full item record