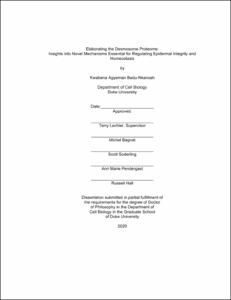 Desmosomes are a class of cell-cell adhesions whose primary physiological function is to maintain the mechanical integrity of tissues. Morphologically, desmosomes are very distinct protein complexes. They are dense pairs of plaques that straddle the interface between two plasma membranes of adjacent cells. In the extracellular space between each plaque are series of desmosome receptors that mediate the cell-cell attachment events and drive cellular cohesion throughout tissues. Emanating from the intracellular face of desmosomes are networks of intermediate filaments to which desmosome plaques are anchored. It is through this molecular chain that desmosomes traditionally bear mechanical load and promote tissue integrity. Molecular roles of the core components sufficient for completing this chain have been well described. However, insights from desmosome pathologies, genetic interactions, and biochemical fractionation have introduced perspectives that strongly suggest that desmosome composition and function extends beyond what is currently known. It is within this general context that I began my exploration into desmosome biology and employed global approaches towards uncovering a novel proteome that revealed unexpected interactions important for tissue function.

First, we used targeted proximity labeling approaches to elaborate the desmosome proteome in epidermal keratinocytes. Quantitative mass spectrometry analysis uncovered a diverse array of new constituents with broad molecular functions. We validated a number of novel desmosome-associated proteins and found that many are membrane proximal proteins that show a dependence on functional desmosomes for their cortical localization. We further explored the mechanism of localization and function of two adaptor proteins enriched in the desmosome proteome, Crk and CrkL. Epidermal deletion of both Crk and CrkL resulted in perinatal lethality with defects in desmosome morphology and keratin organization, thus demonstrating the utility of this dataset in identifying novel proteins required for desmosome-dependent epidermal integrity.

Desmosomes role in mechanical integrity is paramount in the epidermis as skin-blistering pathologies represent one of the primary hallmarks of diseases caused by desmosome disruption. Pemphigus Vulgaris (PV) is a series of autoimmune syndromes where patients produce autoantibodies that target desmosome receptors, desmoglein 3 and desmoglein 1. PV is characterized by weakening cell adhesions that result in widespread epidermal cell separations. While pathologies that characterize PV have been long documented, molecular mechanisms that drive initial desmosome disruption are still not fully understood. We sought to address initial molecular signaling events induced by PV antibodies using targeted proteomic analysis to identify early phosphorylation events. We performed time course phosphoproteomic analysis on keratinocytes early after exposure to PV antibody, AK23. With this approach we observed large coverage of the keratinocyte phosphoproteome that included significant shifts of abundant phosphorylation events after AK23 treatment. To identify the functional relevance of novel phosphorylation events, we followed the localization of constructs containing tagged protein candidates harboring phosphomimetic or non-phosphorylatable mutations. Altogether, these results provide an initial analysis of global phosphorylation events that occur in keratinocytes during the early stages of PV.

Finally, we sought to understand what was an unusual enrichment of RNA-binding proteins in our desmosome proteome. Amongst enriched protein classes were regulators of protein translation. Using immunofluorescent approaches, we were able to visualize distinct desmosome localization of representative members of protein translation machinery as well as assembled ribosomes. Considering this unusual abundance, I was interested in finding out the types of RNAs associated with these desmosome-associated RBPs. To do this we combined our proteomic approach with RNA sequencing and developed new techniques to enrich for specific RNA subpopulations localized at desmosomes. By probing for candidates of interest from this list I was able to observe enrichment of specific transcripts at desmosomes, suggesting an intimate link between RNA regulation and cell-cell adhesion. Taken together, these studies represent the first comprehensive proteomic analyses of desmosome adhesions and highlight novel desmosome interactions that may broaden mechanistic roles for desmosomes in epithelial biology.