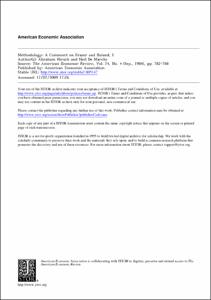 View / Download
1.2 Mb
Date
Authors
Hirsch, Abraham
De, Marchi Neil
Repository Usage Stats
332
views
351
downloads
Abstract
Milton Friedman has been taken by some to be a follower of the logical positivists and by others a disciple of the philosopher Karl Popper, but until recently not enough has been said by way of support for such claims to make it possible to evaluate their substance. Recently, however, Laurence Boland (1979) has suggested that Friedman should rather be considered an "instrumentalist," meaning by this that for Friedman "theories are convenient and useful ways of (logically) generating what have turned out to be true (or successful) predictions or conclusions" (pp. 508-09) and Boland has given us a substantive analysis of his position. More recently Boland has combined forces with William Frazer (1983) to try to demonstrate that while Friedman is an instrumental thinker, and instrumentalismis a point of view against which Popper has argued vigorously still Friedman's instrumentalismis in some sense compatible with Popper's falsificationist doctrine. These efforts are certainly in the right direction. A major reason there has been so little return on such a vast amount of discussion about Friedman's methodologyi s that t4e many participantsin the debate have focussed on one or another aspect of Friedman's formulations without trying to determine what general point of view underlay his approach. Boland has dug deeper, and with Frazer has set out to show one of the fruits of this approach. The effort is therefore to be applauded for what it tries to do. But for reasons that will be given in this comment, Frazer and Boland wind up with a quite distorted picture.
Type
Journal article
Subject
Friedman
history
Permalink
https://hdl.handle.net/10161/2104
Collections
More Info
Show full item record