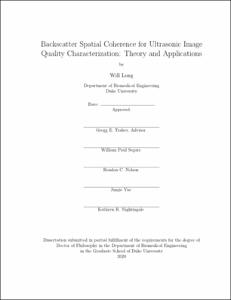 Adaptive ultrasound systems, designed to automatically and dynamically tune imaging parameters based on image quality feedback, represent a promising solution for reducing the user-dependence of ultrasound. The efficacy of such systems, however, depends on the ability to accurately and reliably measure in vivo image quality with minimal user interaction -- a task for which existing image quality metrics are ill-suited. This dissertation explores the application of backscatter spatial coherence as an alternative image quality metric for adaptive imaging. Adaptive ultrasound methods applying spatial coherence feedback are evaluated in the context of three different applications: 1) the automated selection of acoustic output, 2) model-based clutter suppression in B-mode imaging, and 3) adaptive wall filtering in color flow imaging.

A novel image quality metric, known as the lag-one coherence (LOC), was introduced along with the theory that relates LOC to channel noise and the conventional image quality metrics of contrast and contrast-to-noise ratio (CNR). Simulation studies were performed to validate this theory and compare the variability of LOC to that of conventional metrics. In addition, matched measurements of LOC, contrast, CNR, and temporal correlation were obtained from harmonic phantom and liver images formed with varying mechanical index (MI) to assess the feasibility of adaptive acoustic output selection using LOC feedback. Measurements of LOC in simulation and phantom demonstrated lower variability in LOC relative to contrast and CNR over a wide range of clinically-relevant noise levels. This improved stability was supported by in vivo measurements of LOC that showed increased monotonicity with changes in MI compared to matched measurements of contrast and CNR (88.6% and 85.7% of acquisitions, respectively). The sensitivity of LOC to temporally-stable acoustic noise was evidenced by positive correlations between LOC and contrast (r=0.74) and LOC and CNR (r=0.66) at high acoustic output levels in the absence of thermal noise. Together, these properties translated to repeatable characterization of patient-specific trends in image quality that were able to demonstrate feasibility for the automated selection of acoustic output using LOC and its application for in vivo image quality feedback.

In a second study, a novel model-based adaptive imaging method called Lag-one Spatial Coherence Adaptive Normalization, or LoSCAN, was explored as a means to locally estimate and compensate for the contribution of spatially incoherent clutter from conventional delay-and-sum (DAS) images using measurements of LOC. Suppression of incoherent clutter by LoSCAN resulted in improved image quality without introducing many of the artifacts common to other coherence-based beamforming methods. In simulations with known targets and added channel noise, LoSCAN was shown to restore native contrast and increase DAS dynamic range by as much as 10-15 dB. These improvements were accompanied by DAS-like speckle texture along with reduced focal dependence and artifact compared to other coherence-based methods. Under in vivo liver and fetal imaging conditions, LoSCAN resulted in increased generalized contrast-to-noise ratio (gCNR) in nearly all matched image pairs (N = 366) with average increases of 0.01, 0.03, and 0.05 in good, fair, and poor quality DAS images, respectively, and overall changes in gCNR from -0.01 to 0.20, contrast-to-noise ratio (CNR) from -0.05 to 0.34, contrast from -9.5 to -0.1 dB, and texture mu/sigma from -0.37 to -0.001 relative to DAS.

The application of spatial coherence image quality feedback was further investigated in the context of color flow imaging to perform adaptive wall filter selection. The relationship between velocity estimation accuracy and spatial coherence was demonstrated in simulations with varying flow and clutter conditions. This relationship was leveraged to implement a novel method for coherence-based adaptive wall filtering, which selects a unique wall filter at each imaging location based on local clutter and flow properties captured by measurements of LOC and short-lag spatial coherence (SLSC). In simulations and phantom studies with known flow velocities and clutter, coherence-adaptive wall filtering was shown to reduce velocity estimation bias by suppressing low frequency energy from clutter and minimizing the attenuation of flow signal, while maintaining comparable velocity estimation variance relative to conventional wall filtering. These properties translated to in vivo color flow images of liver and fetal vessels that were able to provide direct visualization of low and high velocity flow under various cluttered imaging conditions without the manual tuning of wall filter cutoffs and/or priority thresholds.

Together, these studies present several promising applications of spatial coherence that are fundamentally unique from existing methods in ultrasound. Results in this work support the broad application of spatial coherence feedback to perform patient, window, and target-specific adjustment of imaging parameters to improve the usability and efficacy of diagnostic ultrasound.