The Federal System of Hannah Arendt: A Structure Built Upon Participation 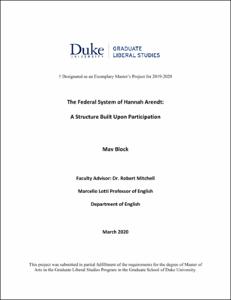 View / Download
763.8 Kb
Date
Author
Block, Mav
Advisor
Mitchell, Robert
Repository Usage Stats
370
views
552
downloads
Abstract
In this thesis, I reconstruct Hannah Arendt’s theory of federalism through a novel interpretation of the relationship between power and authority in her work. Though numerous scholars underscore the import of federalism for Arendt’s politics, theorists have remained silent; some, who champion her council state, acknowledge its federal character – yet none have sought her federal theory. I argue the federal system for Arendt shares a necessary and constitutive relationship to the council state. For Arendt, federal authority is derived from an act of foundation by already constituted powers, while the preservation of this authority depends upon the ongoing capacity of those powers to act individually and collectively. This means, for Arendt, that the federal system demands the specific form of direct public participation in government institutionalized by the council state for its longevity, otherwise it will degenerate. Through exposing Arendt’s federal thought, I show that her reflections on federalism offer valuable insights into the division of powers, the system of checks and balances, the relationship between law and politics, the role of a constitutional court, as well as the danger posed by representative democracy, in what amounts in the last instance to a radical re-conception of the federal republic.
Type
Capstone project
Department
Graduate Liberal Studies
Subject
Hannah Arendt
federalism
republicanism
council system
law and politics
representative democracy
Permalink
https://hdl.handle.net/10161/21080
Citation
Block, Mav (2020). The Federal System of Hannah Arendt: A Structure Built Upon Participation. Capstone project, Duke University. Retrieved from https://hdl.handle.net/10161/21080.
Collections
More Info
Show full item record