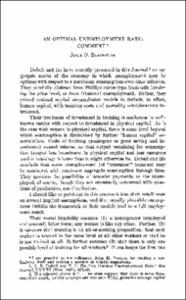 View / Download
338.9 Kb
Date
Author
Blackburn, Dr John
Repository Usage Stats
516
views
838
downloads
Abstract
Dobell and Ho have recently presented in this Journal 1 an aggregate model of the economy in which unemployment may be optimal with respect to a maximum consumption-over-time criterion. They carefully abstract from Phillips curve-type trade-offs involving the price level, or from frictional unemployment. Rather, they extend optimal capital accumulation models to include, in effect, human capital, with training costs and mortality considerations introduced. Their treatment of investment in training is analogous to wellknown results with respect to investment in physical capital. As is the case with respect to physical capital, there is some level beyond which consumption is diminished by further "human capital" accumulation. Costs of training (analogous to gross saving and investment) exceed returns, so that output remaining for consumption (output less investment in physical capital and less resources used in training) is lower than it might otherwise be. Dobell and Ho conclude that some unemployment (of "untrained" humans) may be consistent with maximum aggregate consumption through time. They mention the possibility of transfer payments to the unemployed, of course, though they are necessarily concerned with questions of production, not distribution..................
Type
Journal article
Subject
Costs
Optimal unemployment
Permalink
https://hdl.handle.net/10161/2115
Citation
Blackburn, J. O. (1969). AN OPTIMAL UNEMPLOYMENT RATE: COMMENT. Quarterly Journal Of Economics, 83(3), 518-520.
Collections
More Info
Show full item record