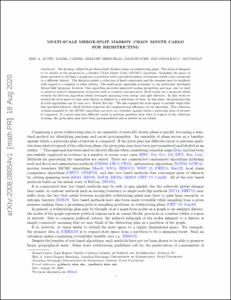 View / Download
11.1 Mb
Authors
Autry, Eric A
Carter, Daniel
Herschlag, Gregory
Hunter, Zach
Mattingly, Jonathan C
Repository Usage Stats
113
views
29
downloads
Abstract
We develop a Multi-Scale Merge-Split Markov chain on redistricting plans. The chain is designed to be usable as the proposal in a Markov Chain Monte Carlo (MCMC) algorithm. Sampling the space of plans amounts to dividing a graph into a partition with a specified number of elements which each correspond to a different district. The districts satisfy a collection of hard constraints and the measure may be weighted with regard to a number of other criteria. The multi-scale algorithm is similar to our previously developed Merge-Split proposal, however, this algorithm provides improved scaling properties and may also be used to preserve nested communities of interest such as counties and precincts. Both works use a proposal which extends the ReCom algorithm which leveraged spanning trees merge and split districts. In this work we extend the state space so that each district is defined by a hierarchy of trees. In this sense, the proposal step in both algorithms can be seen as a "Forest ReCom." We also expand the state space to include edges that link specified districts, which further improves the computational efficiency of our algorithm. The collection of plans sampled by the MCMC algorithm can serve as a baseline against which a particular plan of interest is compared. If a given plan has different racial or partisan qualities than what is typical of the collection of plans, the given plan may have been gerrymandered and is labeled as an outlier.
Type
Journal article
Subject
math.PR
math.PR
cs.NA
math.NA
60j22, 62p25, 91f10, 65c05
Permalink
https://hdl.handle.net/10161/21351
Collections
More Info
Show full item record Associate Research Professor of Mathematics
I am interested in studying techniques to understand fairness in redistricting.  I am also interested in computational fluid dynamics and high-performance computing. James B. Duke Distinguished Professor
Jonathan Christopher  Mattingly grew up in Charlotte, NC where he attended Irwin Ave elementary and Charlotte Country Day.  He graduated from the NC School of Science and Mathematics and received a BS is Applied Mathematics with a concentration in physics from Yale University. After two years abroad with a year spent at ENS Lyon studying nonlinear and statistical physics on a Rotary Fellowship, he returned to the US to attend Princeton University where he obtained a PhD in Applied and
Alphabetical list of authors with Scholars@Duke profiles.