Testing the hypothesis of an impoverished predator guild in the Early Miocene ecosystems of Patagonia: An analysis of meat availability and competition intensity among carnivores 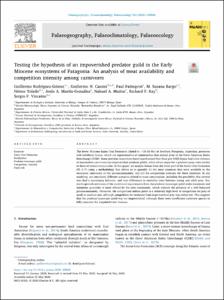 View / Download
1.5 Mb
Date
Authors
Rodríguez-Gómez, G
Cassini, GH
Palmqvist, P
Bargo, MS
Toledo, N
Martín-González, JA
Muñoz, NA
Kay, RF
Vizcaíno, SF
Show More
(9 total)
Repository Usage Stats
33
views
25
downloads
Abstract
© 2020 Elsevier B.V. The lower Miocene Santa Cruz Formation (dated to ~18–16 Ma) of Southern Patagonia, Argentina, preserves rich vertebrate faunas, which are representative of communities that existed prior to the Great American Biotic Interchange (GABI). Some previous researchers have hypothesized that these pre-GABI faunas had a low richness of mammalian carnivores (an impoverished predator guild), while others argue for a predator/prey ratio similar to those of recent communities. In this paper, we analyze faunas from the lower part of the Santa Cruz Formation (FL 1–7) using a methodology that allows us to quantify (i) the meat resources that were available to the secondary consumers of the palaeocommunity; and (ii) the competition intensity for these resources. In our modeling, we considered different scenarios related to meat consumption, including the possibility that several taxa had a scavenging behavior, and also differences in mortality rates between young and adult prey. Our results provide estimates of the nutritional requirements from the predator/scavenger guild under maximum and minimum quantities of meat offered by the prey community, which indicate the presence of a well-balanced palaeocommunity. Moreover, the competition indices point to a relatively high level of competition for prey of small-to-medium size, although competition for resources from large mammal prey was rather low. This suggests that the predator/scavenger guild was not impoverished, although there were insufficient carnivore species to fully consume the megaherbivore biomass.
Type
Journal article
Subject
Santa Cruz Formation
Burdigalian
Predator/scavenger guild
Competition intensity
Food web
Permalink
https://hdl.handle.net/10161/21360
Published Version (Please cite this version)
10.1016/j.palaeo.2020.109805
Publication Info
Rodríguez-Gómez, G; Cassini, GH; Palmqvist, P; Bargo, MS; Toledo, N; Martín-González, JA; ... Vizcaíno, SF (2020). Testing the hypothesis of an impoverished predator guild in the Early Miocene ecosystems of Patagonia: An analysis of meat availability and competition intensity among carnivores. Palaeogeography, Palaeoclimatology, Palaeoecology, 554. pp. 109805-109805. 10.1016/j.palaeo.2020.109805. Retrieved from https://hdl.handle.net/10161/21360.
This is constructed from limited available data and may be imprecise. To cite this article, please review & use the official citation provided by the journal.
Collections
More Info
Show full item record