Associations of novel variants in PIK3C3, INSR and MAP3K4 of the ATM pathway genes with pancreatic cancer risk. 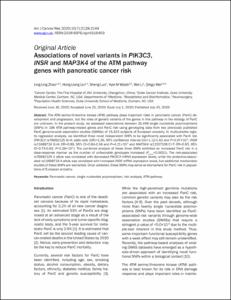 Associate Professor of Neurosurgery
Dr. Walsh is Associate Professor of Neurosurgery and Pathology, Director of the Division of Neuro-epidemiology, and a Senior Fellow in the Duke Center for the Study of Aging and Human Development. He leads Duke’s Neuro-epidemiology Lab, which integrates bench science with statistical methods to study the neurobiology of glial senescence and gliomagenesis. This research interrogates human genomic and epigenomic profiles to identify both heritable and modifiable factors that contribute to ne