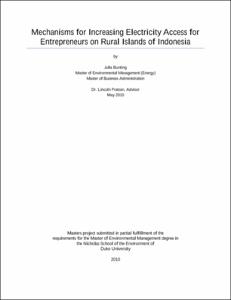 View / Download
951.5 Kb
Date
Author
Bunting, Julia
Advisor
Pratson, Lincoln
Repository Usage Stats
798
views
1,870
downloads
Abstract
ABSTRACT The importance of developing alternative livelihoods in Indonesia is reaching a critical level. Over 60% of the population is reliant upon the ocean for employment and destructive fishing practices have destroyed over half of the marine habitat . As a result, family incomes have suffered and fishers have been forced to travel farther from home, often leaving their families for a month at a time. In response, development efforts have begun to focus their attention on small entrepreneurial businesses that offer an increase in the average wage earned by rural fisherman while also reducing the pressure on wild fish stocks. The business model under analysis employs a franchise system of business development whereby fishermen buy kits to build backyard mariculture tanks capable of raising marine species for export and also for local consumption. While developers have observed success with local adoption and with species rearing, one major challenge remains. The mariculture systems require a constant energy supply to run the pumps but 47% of the country does not have access to electricity. This hurdle poses a significant challenge for the success of the mariculture program but also for other economic development initiatives that often rely on electricity access. The purpose of this Masters Project was to investigate energy alternatives for rural regions of Indonesia, calculate the costs and feasibility of energy development and evaluate the efficacy of the mariculture business model after inclusion of full energy costs. This was accomplished over a five month period through extensive data collection in the field. NGOs, private firms and government agencies were interviewed and documents were obtained. Results of the data collection were analyzed using the Homer Energy Modeling System and other Excel based tools. The results of this study indicate that the costs of energy development in Indonesia are prohibitive for mariculture entrepreneurs. A series of hurdles including geographic isolation, government mandated price ceilings for rate payers and limited wind resource availability pose significant barriers. The results suggest that alternative economic development on island regions of Indonesia should focus on industries that do not require a constant and steady energy supply. Businesses that can take advantage of a short duration of electricity supply or one that is unpredictable will be more cost effective and appropriate to local income levels.
Type
Master's project
Department
Nicholas School of the Environment and Earth Sciences
Subject
Indonesia energy
rural energy development
mariculture entrepreneurship
rural entrepreneurship
Indonesia micro-finance
Permalink
https://hdl.handle.net/10161/2140
Citation
Bunting, Julia (2010). Mechanisms for Increasing Electricity Access for Entrepreneurs on Rural Islands of Indonesia. Master's project, Duke University. Retrieved from https://hdl.handle.net/10161/2140.
Collections
More Info
Show full item record