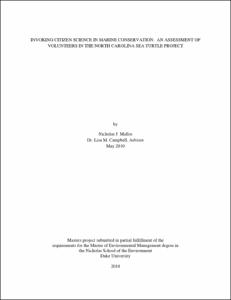 View / Download
819.3 Kb
Date
Author
Mallos, Nicholas
Advisor
Campbell, Lisa
Repository Usage Stats
349
views
512
downloads
Abstract
Citizen science and the concept of surrogate species have become integral components to wildlife conservation, and resource agencies and scientists alike have benefited greatly from the work of volunteers in conservation programs. Although academia has extensively examined the ecological merit of surrogate species in conservation, little attention has been devoted to examining their effects on volunteer engagement with the environment. Volunteers in the North Carolina Sea Turtle Project (NCSTP) enthusiastically seek out opportunities to work with the North Carolina Wildlife Resources Commission (NCWRC), the agency responsible for the NCSTP, to monitor the state’s beaches for sea turtle nesting activity. Based on a survey of the state’s 700 volunteers, this research interrogates the efficacy of sea turtles—a flagship species—to cultivate ocean and coastal stewardship, and the extent to which they motivate volunteers to participate in marine conservation. The findings of this study exposed significant differences in motivations between environmental volunteers and volunteers in the health and human services. Responses showed that sea turtle volunteers were highly motivated by the belief that their work is directly contributing to sea turtle conservation; while social motivations, which serve as the primary factors motivating citizens in social services, were statistically less significant. Regarding the use of flagships in conservation, sea turtles proved essential to attract citizens into the NCSTP; however, once immersed into the organization, volunteers acquired greater appreciation for the coastal and ocean environment. Similarly, sea turtle volunteers demonstrated the use of a flagship species in conservation imparts positive benefits to participants, as many volunteers became more active participants in conservation outside of their volunteer beach organizations. Given the rise in environmental volunteerism and the increasing dependence of conservation managers on in-kind, citizen contributions and labor, additional interrogations of volunteer motives in conservation are necessary. As this research reinforced the utility of flagship species in conservation, further exploration of surrogate species use in volunteerism should be carried out to assist resource managers and scientists gain a better understanding of the ways in which they can structure their organizations to empower participants, and encourage advocacy for ecosystem conservation.
Type
Master's project
Department
Nicholas School of the Environment and Earth Sciences
Subject
Citizen science
Flagship species
Volunteer conservation
Permalink
https://hdl.handle.net/10161/2143
Citation
Mallos, Nicholas (2010). Invoking citizen science in marine conservation: an assessment of volunteers in the North Carolina Sea Turtle Project. Master's project, Duke University. Retrieved from https://hdl.handle.net/10161/2143.
Collections
More Info
Show full item record