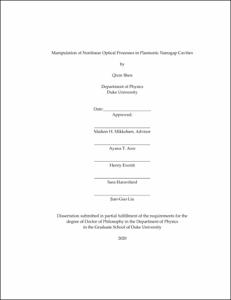 Nonlinear generation of optical fields has enabled many exciting breakthroughs in light science such as nonlinear imaging, all-optical switching and supercontinuum generation. The intrinsic nonlinear response from bulk materials is extremely weak and phase matching conditions need to be satisfied for efficient generation. Plasmonic structures have proven to be a promising platform to investigate nonlinear optics due to the capability to enhance and localize electromagnetic fields within subwavelength volumes beyond the diffraction limit. However, the origin of the large nonlinear response observed in the plasmonic structures is not fully understood and the investigations of nonlinear processes involving multiple excitation wavelengths are limited. Furthermore, simultaneous enhancement and precise manipulation of multiple nonlinear optical processes have not been experimentally demonstrated.

In this dissertation, I describe a specific film-coupled plasmonic nanogap cavity structure consisting of arrays of nanoparticles separated from a metallic ground plane by an ultrathin dielectric layer. Polarization-dependent, dual-band and spatially-overlapped resonances are obtained with arrays of rectangle nanoparticles where the two resonances can be tuned independently. Highly efficient third harmonic generation (THG) is achieved by integrating dielectric materials in plasmonic nanogap cavities, resulting in more than six orders of magnitude enhancement in the THG response compared with a bare gold film. Utilizing comprehensive spectral analysis and finite-element simulation, it is concluded that the main contributing nonlinear source is dielectric material in the gap. Furthermore, I demonstrate simultaneous enhancement of three nonlinear responses from THG, sum frequency generation (SFG) and four wave mixing (FWM) by integrating 1-7 nm Al2O3 layer in the nanocavities formed by a gold ground plane and silver nanorectangles. Enhancement up to 106-fold for both THG and FWM and 104-fold for SFG is achieved when the excitation wavelengths overlap with the resonance wavelengths from transverse and longitudinal modes of the nanorectangles. Precise control of the relative strength of these nonlinear responses is demonstrated either actively by varying the ratio between excitation powers or passively by changing the Al2O3 gap thickness. Moreover, a metasurface-based efficient frequency mixer is realized utilizing diamond and a novel polymer transfer process is employed for creating nanoparticle arrays. This new insight into the nonlinear response in ultrathin gaps between metals is expected to be promising for both the fundamental understanding of nonlinear optics at the deep nanoscale and efficient on-chip nonlinear devices such as ultrafast optical switching and entangled photon sources. The capability to precisely manipulate nonlinear optical processes at the nanoscale could find important applications for nonlinear imaging and quantum communication.