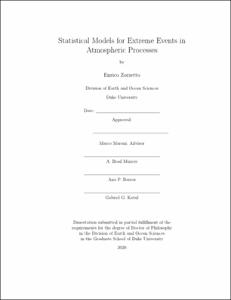 Extreme events - that is, intense events so rare to be poorly represented in historical observational records - play a fundamental role in atmospheric processes, and can have far reaching consequences ranging from impacts on society, economy, the environment, as well as on the global water and energy budgets. However, characterizing the statistical properties of such events is a challenging task, as (i) by definition extremes are poorly sampled, and thus studying them often requires extrapolation beyond the range of available observations, and (ii) extremes are often the result of nonlinear and intermittent processes, which determine significant difficulties both in predicting them and in studying their frequency of occurrence beyond the range of observations. This dissertation focuses on new statistical methods specifically aimed at characterizing extremes events in rainfall and boundary layer turbulence, including contributions along three main lines of inquiry:

1) Developing extreme value models able to reduce estimation uncertainty in the case of short rainfall time series. To this end, a non-asymptotic approach is developed which, deviating from traditional extreme value theory, models the entire distribution of rainfall magnitudes and frequency of occurrence. Using compound distributions and the structure of latent-level Bayesian models, this framework accounts for the effects of low-frequency variability of rainfall statistics on the tail decay of their probability distribution.

2) Characterizing the frequency of extreme values from remotely-sensed rainfall estimates. This objective is approached by developing a downscaling technique that allows comparing rainfall statistics across different spatial averaging scales, and by constructing a model of the error so as to permit their validation over poorly gauged locations. The framework developed here now allows for the production of large-scale estimates of the frequency of extreme rainfall based on satellite-derived rainfall datasets and their validation even in data-scarce regions.

3) Investigating the dynamics of scalar quantities transported in the atmospheric boundary layer, with a focus on fluxes of sensible heat and methane. In the case of sensible heat, I studied to what extent the extreme values properties of temperature fluctuations retain information on the turbulence generation mechanism. In the case of methane, I focused instead on an inverse problem: given the observed statistical properties of methane concentration fluctuations, is it possible to infer the spatial intermittency of its source at the ground? In both cases, I found that statistical properties of the scalar, including its extreme value statistics, can be used to improve characterization of the turbulent flow and of its boundary conditions.