Evaluation of Tiger Conservation in India: the use of comparative effectiveness research 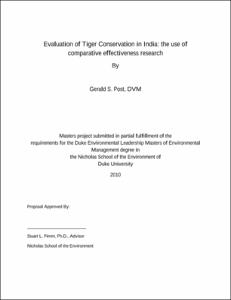 View / Download
678.0 Kb
Date
Author
Post, Gerald
Advisor
Pimm, Stuart
Repository Usage Stats
802
views
4,672
downloads
Abstract
Tigers, the largest of the felids, are now a globally threatened species with only approximately 3000 wild tigers surviving. India contains about 60% or 2000 of the animals, yet despite aggressive conservation efforts the number of tigers is declining. The causes of the decline are prey depletion, habitat destruction and poaching. Over the past 30 years of tiger conservation efforts in the various protected areas within India, success has been incredibly variable, with few documented cases of parks were the numbers of tigers have risen, but many more cases of parks where tiger populations have plummeted. There are very few scientific papers that assess the effectiveness of conservation efforts and when it is considered, implementation rather than outcome is evaluated. Recent literature suggests that evaluating outcomes in more predictive of conservation success. This thesis attempts to use comparative research effectiveness techniques, a methodology used to evaluate medical therapy effectiveness, to evaluate tiger conservation in India. Various tiger conservation experts were polled and a list of 7 successful protected areas—Kanha, Corbett, Pench, Kaziranga, Bhadra, Bandipur, and Nagarhole—and 5 failed protected areas—Palamau, Dampa, Panna, Sariska and Namdapha—were generated. A list of variables that could impact outcome at these protected areas was generated and included biologic (tiger density, prey density, area of the reserve, the presence/absence of a biological corridor), geographical (the Indian State the reserve is in eco-region of the reserve), economic (number of tourists, revenue from tourism, forestry, funding per sq km) and socio-political factors (human population data, presence/absence of a “conservation hero”, Park Management Effectiveness Rating, poaching). The factors that were positively correlated with success included tiger density and the presence of a biological corridor. Population density and level of funding did not correlate with success or failure. Many of the successful reserves were in areas of high human population density and many of the failures were in areas of low human population density. Although not statistically correlated, the presence of a “conservation hero” was seen in 5 of the 7 successes but in only 1 of the failures. The lack of correlation between many of the independent variables evaluated and success or failure of the tiger reserves has revealed that tiger conservation can be successful despite factors such as high human population densities and only average funding to the reserve. Comparative effectiveness research techniques can be used to evaluate conservation outcomes.
Type
Master's project
Department
Nicholas School of the Environment and Earth Sciences
Subject
tiger
conservation
endangered species
India
effectiveness
evaluation
Permalink
https://hdl.handle.net/10161/2147
Citation
Post, Gerald (2010). Evaluation of Tiger Conservation in India: the use of comparative effectiveness research. Master's project, Duke University. Retrieved from https://hdl.handle.net/10161/2147.
Collections
More Info
Show full item record