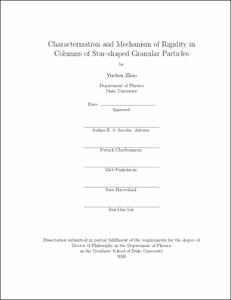 An important challenge in the science of granular materials is to understand the connection between the shapes of individual grains and the macroscopic response of the aggregate. Granular packings of concave or elongated particles can form free-standing structures like walls or arches, in sharp contrast to the behaviors of spherical grains. For some particle shapes, such as staples, the rigidity arises from interlocking of pairs of particles, but the origins of rigidity for non-interlocking particles remains unclear. In addition to their intrinsic interest, these packings are relevant to lightweight and reconfigurable structures in civil, geotechnical and material engineering applications.

In this thesis, we report on experiments and numerical simulations of packings of star-shaped particles consisting of three mutually orthogonal sphero-cylinders whose centers coincide. The first set of experiments studies the chance of obtaining a free-standing column when the confining tube of the column is removed, which we will call it as ``intrinsic stability''. We prepare monodisperse packings of star-shaped particles with different length-to-arm diameter aspect ratio α, interparticle friction and particle-base friction. We also vary packing density by vibrating the packings when they are in the tube. We find that the intrinsic stability depends on packing dimension: columns of greater diameter or shorter height are more stable. Both arm length and interparticle friction can greatly increase the intrinsic stability, while the packing density and basal friction have limited effects on the intrinsic stability.

The second set of experiments involves stability of free-standing columns (prepared from the first set of experiments) under three different external perturbations: (1) base tilting; (2) static axial loading; and (3) vertical vibration. For the base tilting test, we gradually tilt the base of the column and observe column collapse as a function of tilt angle. We find that columns of low friction particles are more fragile than those of high friction particles. For the axial loading test, we gradually increase the loading on a column until it collapses. We find that tall columns are more fragile. For the vibration test, we apply vertical sinusoidal vibration from the base to destabilize the column. Both interparticle and basal friction improve packing stability in terms of increasing relaxation time under vibration. We also find that tall columns are more sensitive to the vibration in the sense that they collapse faster than short ones under the same vibration.

In the third set of experiments, we vary α and subject the packings to quasistatic direct shear. For small α, we observe a finite yield stress. For large α, however, the packings become rigid when sheared, supporting stresses that increase sharply with increasing strain. Analysis of x-ray micro-computed tomography data collected during the shear reveals that the stiffening is associated with a tilted, oblate cluster of particles near the nominal shear plane in which particle deformation and average contact number both increase.

Molecular dynamics simulations that closely match the third experiments are used to investigate the finite yield stress and the stiffening. In simulation, interparticle contact forces are known to us. For yield packings (small α), simulations suggest no apparent cohesion. For stiffening packings (large α), simulation results show that the particles are collectively under tension along one direction even though they do not interlock pairwise. These tensions come from contact forces with large associated torques, and they are perpendicular to the compressive stresses in the packing. They counteract the tendency to dilate, thus stabilizing the particle cluster.