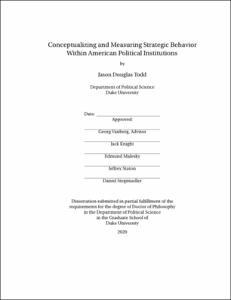 The three papers in this dissertation seek to measure more accurately critical concepts in the field of American political institutions so as to inform and enable theory-building. The first paper addresses committee prestige in the U.S. House of Representatives, arguing that the seniority of members transferring off of standing committees reveals important information about the relative prestige of those committees. In response, I import a measure called PageRank which enables me to exploit information on seniority while measuring committee prestige. I then demonstrate that the prestige of a legislator's committee portfolio predicts the political action committee (PAC) contributions she receives for the next campaign cycle. A second paper tackles the theoretical possibility that majority parties may manipulate their control over committee assignments for partisan goals, countering a vast literature which has generally failed to find evidence of partisan manipulation across stage legislatures. I argue that several theoretical and practical constraints render universal stacking impractical and introduce a new measure of partisan stacking called "seats above expectation" (SAE); I find little evidence of universal partisan (or ideological) stacking in state legislatures. I then argue that majority parties should selectively stack committees under two circumstances: (1) when the operations of committees affect the electoral prospects of all legislators, generating so-called "uniform electoral externalities;" and (2) when committees in a polarized setting are endowed with gatekeeping rights. Leveraging SAE, evidence from the states confirms these selective stacking hypotheses. The final paper examines political polarization, offering a more behavioral conception and a network-based measure, called modularity, applicable to collegial courts and legislatures alike. After demonstrating validity, I then measure polarization at the U.S. Supreme Court and in both houses of Congress using opinion-joining and cosponsorship networks. My primary contributions here are to argue that polarization need not be equated with partisan polarization and to develop a measure which permits such a distinction and decomposition. Indeed, I find that while polarization is tantamount to partisan polarization in the present-day Congress, as recently as four decades ago partisanship accounted for just over half of measured polarization.