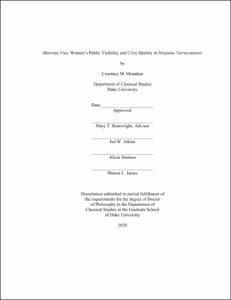 This dissertation examines evidence for the public visibility of elite women in Roman cities in the province of Hispania Tarraconenesis from the first through the third centuries C. E. By focusing on the epigraphic evidence for women's contributions to public life in three cities, I analyze how women used the Roman conventions of euergetism, participation in religious institutions, and other methods of physically changing the visual landscape of a city to promote themselves as individuals and as participants in Roman civic life. I argue that Hispania Tarraconensis shows great diversity in the options available to women to present their own identities in public spaces, but that throughout the province women did actively construct a public civic identity that transcends the traditional image of women as absent from or invisible within Roman civic spaces.

I begin my analysis in Chapter One (Why Tarraconensis?) by examining the unique characteristics of the province Hispania Tarraconensis that makes it a particularly valuable case study for the visibility of Roman women. I conclude that the combination of the wealth of available evidence in the province as well as the lack of studies of individual provinces that center women make this an especially useful arena for exploration. I also argue that the variations in regions' experiences with Roman imperialism affect how women's participation manifested itself in particular cities.

In Chapter Two (Tarraco), I examine the evidence for my first case study, the Roman city, Tarraco (modern Tarragona), which served as the capital of Hispania Tarraconensis. I discuss the history of the city and the cultural and historical context that would have affected the topography of the Roman city. I examine the full epigraphic corpus for Tarraco and, wherever possible, contextualize these inscriptions within the archaeological, art historical, and literary context of the city. I conclude that participation in the imperial cult at Tarraco through election to prestigious priesthoods provided women with the highest level of visibility in this city, and that other methods of visibility (e.g.: as public benefactress) were not as frequently used in Tarraco because of the city's close connection to Rome and association with the imperial family. I also argue that these priesthoods were held by women in their own right and did not rely on or primarily serve male members of their families.

Chapter Three (Emporiae) examines the evidence for Emporiae (modern Ampurias), a coastal city with a history of Greek colonization. The evidence here is less focused on the imperial cult and include women who emphasized their contributions to the cities more through votive inscriptions and public donations. Moreover, the history of the city as a place where Iberian, Greek, and Roman cultures coexisted changes the way that women's identity was represented. In Chapter Four (Caesaraugusta), I turn to the city of Caesaraugusta (modern Zaragoza), which has produced significantly less evidence than either of the two previous case studies. I, therefore, argue that the city is useful to study both for its position as a conventual capital in the interior of the Iberian Peninsula, and as an experiment in methodologies that can present a model for studying other cities with similar problems with the survival of evidence.

Finally, I open this study up to an examination of what public visibility in provincial cities can tell us about women's experience with Roman imperialism and a construction of a female civic identity. Since women were not allowed to officially participate in politics or hold offices in Roman cities, their contributions to civic life have been overlooked and Roman citizenship has become synonymous with male citizenship. I argue that there was a sense of female civic identity and that women in Hispania Tarraconensis cultivated this self-image through the careful construction of inscriptions, statues, public works, and participation in important religious institutions. Women both identified with and presented themselves as representatives of cities, regions, and provinces and did not solely (or even primarily) do this to honor their male relatives or families as a whole. Studies like this can open up and nuance our understanding of the Roman world beyond traditional Rome-centric and military-political historical narratives, which is essential in a time when the Classical world is frequently misappropriated by cultural and political groups in order to promote traditional female values and the supremacy of European identity.