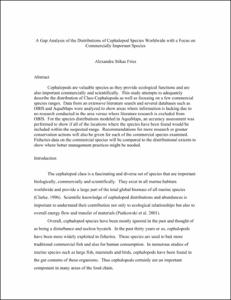 View / Download
4.1 Mb
Date
Author
Fries, Alexandra Stikas
Advisor
Halpin, Patrick
Repository Usage Stats
568
views
2,035
downloads
Abstract
Cephalopods are valuable species as they provide ecological functions and are also important commercially and scientifically. This study attempts to adequately describe the distribution of Class Cephalopoda as well as focusing on a few commercial species ranges. Data from an extensive literature search and several databases such as OBIS and AquaMaps were analyzed to show areas where information is lacking due to no research conducted in the area versus where literature research is excluded from OBIS. For the species distributions modeled in AquaMaps, an accuracy assessment was performed to show if all of the locations where the species have been found would be included within the suspected range. Recommendations for more research or greater conservation actions will also be given for each of the commercial species examined. Fisheries data on the commercial species will be compared to the distributional extents to show where better management practices might be needed.
Type
Master's project
Department
Nicholas School of the Environment and Earth Sciences
Subject
cephalopod
fisheries
distribution
marine
Permalink
https://hdl.handle.net/10161/2162
Citation
Fries, Alexandra Stikas (2010). A Gap Analysis of the Distributions of Cephalopod Species Worldwide with a Focus on Commercially Important Species. Master's project, Duke University. Retrieved from https://hdl.handle.net/10161/2162.
Collections
More Info
Show full item record