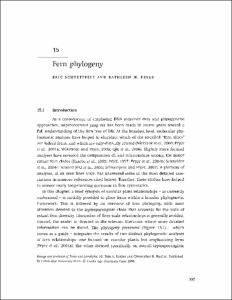 View / Download
1.2 Mb
Date
Authors
Schuettpelz, E
Pryer, KM
Repository Usage Stats
20
views
2
downloads
Abstract
© Cambridge University Press 2008 and Cambridge University Press 2009. Introduction As a consequence of employing DNA sequence data and phylogenetic approaches, unprecedented progress has been made in recent years toward a full understanding of the fern tree of life. At the broadest level, molecular phylogenetic analyses have helped to elucidate which of the so-called “fern allies” are indeed ferns, and which are only distantly related (Nickrent et al., 2000; Pryer et al., 2001a; Wikström and Pryer, 2005; Qiu et al., 2006). Slightly more focused analyses have revealed the composition of, and relationships among, the major extant fern clades (Hasebe et al., 1995; Wolf, 1997; Pryer et al., 2004b; Schneider et al., 2004c; Schuettpelz et al., 2006; Schuettpelz and Pryer, 2007). A plethora of analyses, at an even finer scale, has uncovered some of the most detailed associations (numerous references cited below). Together, these studies have helped to answer many long-standing questions in fern systematics. In this chapter, a brief synopsis of vascular plant relationships - as currently understood - is initially provided to place ferns within a broader phylogenetic framework. This is followed by an overview of fern phylogeny, with most attention devoted to the leptosporangiate clade that accounts for the bulk of extant fern diversity. Discussion of finer scale relationships is generally avoided; instead, the reader is directed to the relevant literature, where more detailed information can be found.
Type
Book section
Permalink
https://hdl.handle.net/10161/21805
Published Version (Please cite this version)
10.1017/CBO9780511541827.016
Collections
More Info
Show full item record