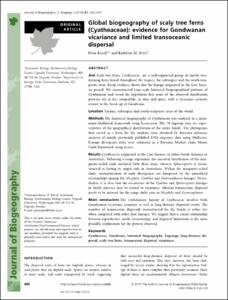 View / Download
582.0 Kb
Date
Authors
Korall, P
Pryer, KM
Repository Usage Stats
29
views
3
downloads
Abstract
Aim: Scaly tree ferns, Cyatheaceae, are a well-supported group of mostly tree-forming ferns found throughout the tropics, the subtropics and the south-temperate zone. Fossil evidence shows that the lineage originated in the Late Jurassic period. We reconstructed large-scale historical biogeographical patterns of Cyatheaceae and tested the hypothesis that some of the observed distribution patterns are in fact compatible, in time and space, with a vicariance scenario related to the break-up of Gondwana. Location: Tropics, subtropics and south-temperate areas of the world. Methods: The historical biogeography of Cyatheaceae was analysed in a maximum likelihood framework using Lagrange. The 78 ingroup taxa are representative of the geographical distribution of the entire family. The phylogenies that served as a basis for the analyses were obtained by Bayesian inference analyses of mainly previously published DNA sequence data using MrBayes. Lineage divergence dates were estimated in a Bayesian Markov chain Monte Carlo framework using beast. Results: Cyatheaceae originated in the Late Jurassic in either South America or Australasia. Following a range expansion, the ancestral distribution of the marginate-scaled clade included both these areas, whereas Sphaeropteris is reconstructed as having its origin only in Australasia. Within the marginate-scaled clade, reconstructions of early divergences are hampered by the unresolved relationships among the Alsophila, Cyathea and Gymnosphaera lineages. Nevertheless, it is clear that the occurrence of the Cyathea and Sphaeropteris lineages in South America may be related to vicariance, whereas transoceanic dispersal needs to be inferred for the range shifts seen in Alsophila and Gymnosphaera. Main conclusions: The evolutionary history of Cyatheaceae involves both Gondwanan vicariance scenarios as well as long-distance dispersal events. The number of transoceanic dispersals reconstructed for the family is rather few when compared with other fern lineages. We suggest that a causal relationship between reproductive mode (outcrossing) and dispersal limitations is the most plausible explanation for the pattern observed. © 2013 The Authors Journal of Biogeography Published by John Wiley & Sons Ltd.
Type
Journal article
Permalink
https://hdl.handle.net/10161/21822
Published Version (Please cite this version)
10.1111/jbi.12222
Publication Info
Korall, P; & Pryer, KM (2014). Global biogeography of scaly tree ferns (Cyatheaceae): Evidence for Gondwanan vicariance and limited transoceanic dispersal. Journal of Biogeography, 41(2). pp. 402-413. 10.1111/jbi.12222. Retrieved from https://hdl.handle.net/10161/21822.
This is constructed from limited available data and may be imprecise. To cite this article, please review & use the official citation provided by the journal.
Collections
More Info
Show full item record