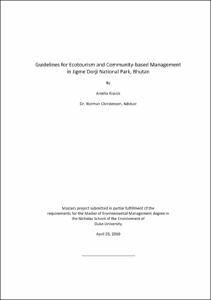 View / Download
2.2 Mb
Date
Author
Kissick, Amelia
Advisor
Christensen, Norman
Repository Usage Stats
674
views
2,552
downloads
Abstract
Bhutan is a small land-locked country between India and China with a landscape ranging from subtropical plains in the south to high Himalayan peaks in the North. The country has generally isolated itself and continues to conserve its culture and environment through restricted tourism and a development policy that revolves around Gross National Happiness instead of Gross Domestic Product. At 4,349 Km2, Jigme Dorji National Park (JDNP) covers about 11% of the total area of Bhutan and has some of the highest biodiversity in the country. Given that there are also over 6,000 inhabitants in the park and increasing human-wildlife conflicts, the Royal Government of Bhutan sees ecotourism as a way to incentivize the conservation of the environment while addressing issues of poverty and unemployment. While true ecotourism is hindered by Bhutan’s tourism policy, improved collaboration among tour operators, park management, government, and community members living in JDNP will lead to more authentic ecotourism and increased benefits to stakeholders in the park. Policy recommendations and ecotourism guidelines provided are based on site visits, interviews, and the results of surveys measuring tourist and tour operator practices and preferences in Bhutan and Jigme Dorji National Park.
Type
Master's project
Department
Nicholas School of the Environment and Earth Sciences
Subject
Bhutan
Ecotourism
Community-based
Permalink
https://hdl.handle.net/10161/2192
Citation
Kissick, Amelia (2010). Guidelines for Ecotourism and Community-based Management in Jigme Dorji National Park, Bhutan. Master's project, Duke University. Retrieved from https://hdl.handle.net/10161/2192.
Collections
More Info
Show full item record