An Analysis of Erosion and Sedimentation Programs in North Carolina 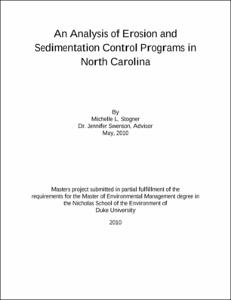 View / Download
1.6 Mb
Date
Author
Stogner, Michelle
Advisor
Swenson, Jennifer
Repository Usage Stats
331
views
474
downloads
Abstract
Sedimentation is considered to be the number one pollutant of North Carolina waters. When excessive sediments enter the water, normally as a result of construction or agriculture, severe ecological consequences occur. Soil particles can transport chemical pollutants, increase turbidity and decrease the quality of receiving waters. In North Carolina there are 53 local (county or city) Erosion and Sedimentation Control (E&SC) Programs that have the authority to approve E&SC Plans for construction activities within their own jurisdictional boundaries. This Masters Project evaluated 24 E&SC programs by examining their Ordinances and comparing them with the model ordinance drafted by Department of Environment and Natural Resources. In addition, I organized and analyzed local program data that was collected from the 24 programs through a survey as part of the Muddy Waters Watch Program, an Environmental Protection Agency Section 319 grant project. The data extracted was on buffer widths, staff, active construction sites, notices of violations, limit of site exposure and graded slopes and fills. In order to assess the importance of these regulations, I conducted a riparian buffer analysis on the French Broad River using the National Land Cover Dataset Change Product for 1992 to 2001. The results indicate that the number of staff and their qualifications varied among the programs. On average, each active construction site was inspected once a week, and in some situations once every two weeks. The ordinance analysis showed that while each program has the model ordinance as a reference, each is unique to their area. However, certain aspects of the model ordinance, such as exposure and slopes, should be modified for different North Carolina regions. The French Broad River buffer analysis demonstrated the importance for adequate buffer regulations. While the amount of change was small, the change that did occur was classified as buffering land types (forest and grasslands) to pollutant land types (urban, industrial and agriculture). The French Broad River has the least stringent buffer regulations, the most active construction sites and the steepest slopes. Areas such as this are more prone to sediment pollution and thus should have wider buffer widths.
Type
Master's project
Department
Nicholas School of the Environment and Earth Sciences
Subject
Erosion and Sedimentation
Buffer analysis
pollution
program evaluation
Permalink
https://hdl.handle.net/10161/2197
Citation
Stogner, Michelle (2010). An Analysis of Erosion and Sedimentation Programs in North Carolina. Master's project, Duke University. Retrieved from https://hdl.handle.net/10161/2197.
Collections
More Info
Show full item record