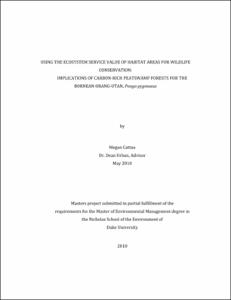 View / Download
2.0 Mb
Date
Author
Cattau, Megan
Advisor
Urban, Dean
Repository Usage Stats
447
views
465
downloads
Abstract
Fragmentation of lowland peatswamp forests in Borneo poses a serious threat to the endangered Bornean orang-utan, whose decreasing population trends are attributed primarily to habitat loss. The orang-utan is projected to be extinct by 2020 unless existing populations can be connected and new conservation areas established, which is not currently economically viable. However, peatswamp forests, on which orang-utans can be found at their greatest densities, have a large capacity for carbon sequestration and storage and, thus, a high potential value on the carbon market. Unfortunately, as these wetlands are being deforested, drained, and burned for development, the peat soil is decomposing, emitting CO2, and impacting global climate change. This project is a spatially explicit analysis of an area of fragmented peatswamp forest in Central Kalimantan, Indonesia that explores how the conservation targets of ape preservation and carbon sequestration and storage can be mutually satisfied through land management strategies. First, I prioritized intact peatswamp forest patches for conservation based on orang-utan presence and patch geometry metrics. To do this, I surveyed line transects in the study area, Block C of the Former Mega Rice Project, for orang-utan sleeping nests and produced a regional density estimate of 2.517 individuals / km2. I identified patches greater than 350 ha from Landsat 7 TM data and then calculated the number of individuals and patch geometry metrics for each patch. I found the total population on Block C to be 2,161 individuals, only 1,146 of which are located in forest fragments with a population size large enough to be considered viable. I generated a model of habitat suitability for the orang-utan using maximum entropy methods. Then, I proposed corridors through degraded areas between the six priority patches of intact forest using least-cost path methods. The corridors included areas of high habitat suitability and also areas of high carbon value, and would increase the viable population size of orang-utans to 1,788 individuals. This project demonstrates how the incentive of carbon financing can make possible wildlife protection strategies, and how we might begin to use spatial planning to maximize biodiversity and ecosystem service benefits on the landscape.
Type
Master's project
Department
Nicholas School of the Environment and Earth Sciences
Subject
Borneo
carbon market
conservation planning
corridor
orang-utan
peat
Permalink
https://hdl.handle.net/10161/2201
Citation
Cattau, Megan (2010). Using the Ecosystem Service Value of Habitat Areas for Wildlife Conservation: Implications of Carbon-Rich Peatswamp Forests for the Bornean Orang-utan, Pongo Pygmaeus. Master's project, Duke University. Retrieved from https://hdl.handle.net/10161/2201.
Collections
More Info
Show full item record