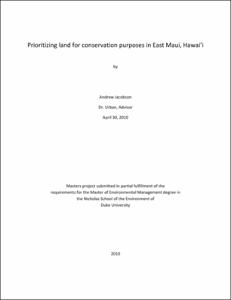 View / Download
1015.8 Kb
Date
Author
Jacobson, Andrew
Advisor
Urban, Dean
Repository Usage Stats
256
views
280
downloads
Abstract
Hawai’i has 25% of the United States’ federally listed endangered species and nearly 75% of the nation’s recorded extinctions. Although no such list or datasets exists for cultural and historical landmarks, these resources may be similarly threatened. Of the eight major Hawaiian Islands, Maui is the second largest and has the third largest population. The average number of daily visitors has increased 333% to 51,222 people from 1980 to 2007. The history of grazing and agriculture along with increasing resident and tourist populations has placed pressure on Maui’s resources. East Maui is the least developed part of the island and may be in a critical time period before becoming over-developed. Therefore, this study seeks to identify the parcels with the most relevant and important resources in and for the region today. Using primarily local interviews and historical data, I developed a conservation dataset linked to the region’s tax parcels. The data were categorized into five resource groups: biological, recreational, cultural, historical and other. With the creation of a GIS-based tool, these categories can be given user-defined weights to highlight different conservation priorities. This will function as a decision support tool that will allow the land trust to explore different protection scenarios. This data, tool and document should provide a framework from which the land trust can base future conservation decisions regarding East Maui. I conducted eight different scenarios and selected parcels with the highest values, or greatest conservation importance. These parcels were compared across the scenarios. These analyses highlighted that historical resources are relatively under-protected, that many resources are concentrated in a limited number of parcels, and that many top parcels are proximate to county-designated growth boundaries. These results should incentivize the conservation community; protecting a few parcels can save a significant number of resources and that action should be taken soon before development is proposed.
Type
Master's project
Department
Nicholas School of the Environment and Earth Sciences
Subject
Maui
prioritization study
Permalink
https://hdl.handle.net/10161/2202
Citation
Jacobson, Andrew (2010). Prioritizing land for conservation purposes in East Maui, Hawai'i. Master's project, Duke University. Retrieved from https://hdl.handle.net/10161/2202.
Collections
More Info
Show full item record