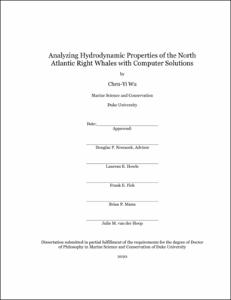 Animals experience hydrodynamic forces (lift, drag, and side) and moments (pitching, yawing, and rolling) as a result of motion in an aqueous medium. Under selective pressure, most cetaceans, including porpoises, dolphins, and whales, developed a streamlined body shape and modified limbs, which delay the separation of flow, create lower drag when they swim, and therefore decrease their locomotor cost. In order to calculate the locomotor cost and propulsive efficiency of cetaceans, accurate estimates of drag on marine animals are required. However, extra momentum imparted into the fluid from lift and side forces as well as pitching, rolling, and yawing moments (here, the parasitic loads) results in extra drag force on the animal. Therefore, in addition to streaming and delaying flow separation, animals must also minimize excess fluid momentum resulting from parasitic loads. Given the endangered status of the North Atlantic right whale (Eubalaena glacialis; hereafter NARW), analyzing the hydrodynamic characteristics of the NARWs was the focus of this work. Additionally, previous studies showed that body shape of NARWs changes with life stages, reproduction status, nutritive conditions or prey abundance, and the effects of entanglement in fishing gear. Therefore, in this study, computational fluid dynamics (CFD) analysis was performed on multiple 10 m three-dimensional NARW models with different body shapes (e.g., normal condition, emaciated, and pregnant) to measure baseline measurements of flow regimes and hydrodynamic loads on the animal. Swimming speeds covering known right whale speed range (0.125 m/s to 8 m/s) were simulated in most scenarios. In addition to the hydrodynamic effects of different body shapes, drag was also considered a function of parasitic loads. The NARW models were embedded with bone segments that allowed one to manipulate the body pose of the model via adjusting the flippers or the spine of the animal before measuring hydrodynamic drag. By doing so, momentum from parasitic loads was expected to be eliminated. CFD simulations revealed that drag on NARWs is dictated by its irregular outline and that the drag coefficient (0.0071-0.0059; or dimensionless drag) of on NARWs is approximately twice that of many previous estimates for large cetaceans. It was also found that pregnant NARW model encounters the lowest drag coefficient due to delayed flow separation resulting from enlarged abdomen, whereas the emaciated NARW model experiences the highest drag coefficient possibly due to the concavity at the post-nuchal region. These results suggested that drag on NARWs and their thrust power requirements were indeed affected by its body shape but the differences between the three NARW models tested were small. Lastly, minimum drag, which corresponds to the elimination of the parasitic loads, can be obtained by adjusting the pose of the animal. Thus, minimum drag occurs at the neutral trim pose. For the static, normo-nourished NARW model, simulations revealed that by changing the angle of attack of the flippers by 4.03° (relative to the free-stream flow) and pitching the spine downward by 5° while maintaining fluke angle, the drag was lowered by approximately 11% across the flow speeds tested. This drag reduction was relative to the drag study conducted on the same animal model but without body pose adjustments. Together the studies included in the present work explored and highlighted the capability of numerical methods in investigating the hydrodynamics and energetics of cetaceans. Future studies should address how computer solutions can be used to solve problems from a wider aspect. For instance, extra parasitic loads caused by attached gear as well as possible injuries due to the encounter with fishing gear should also be considered while evaluating the energy budget of the North Atlantic right whales.