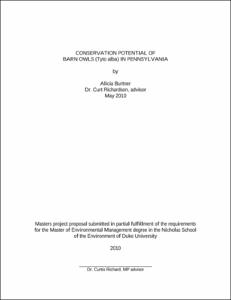 View / Download
5.9 Mb
Date
Author
Burtner, Alicia
Advisor
Richardson, Curtis
Repository Usage Stats
629
views
2,238
downloads
Abstract
Though once prolific, the barn owl (Tyto alba) is now considered vulnerable in Pennsylvania and vulnerable-to-critically imperiled in all surrounding states. Barn owls are charismatic animals. They are wide-ranging generalists, so they are seldom the target of species-specific conservation efforts. Barn owls thrive in open habitats, so their North American extent expanded extensively in the early 1900 with the increased deforestation brought by intensified farming. Farming practices in the northern range of the Unites States subspecies (T. alba pratincola) are changing, and barn owl populations appear to be responding. Across Pennsylvania, open pastures are being replaced by smaller, row crop fields that have the decrease barn owl hunting habitat. With the exception of a several nesting box companies, few people are actively working towards conservation of barn owls. Statistically accurate descriptions of their specific habitat requirements are rare as a result of their wide range and general disinterest in studying the species. Radio-transmitted data from 16 barn owl fledglings released from Pittsburgh, Pennsylvania, was used to determine preferred habitat and climatic conditions. Owl dispersal paths spanned the eastern United States. Dispersal patterns consisted of bursts of rapid dispersal as well as heavy use of home ranges of 320 km2. The most heavily used point within each established home range used by a successful owl was compared to locations of mortalities using envelope, generalized linear, and classification and regression tree spatial models. The most heavily used habitat was low-lying, flat, and open with temperatures seldom dipping below freezing. The maps created by these models were compared using Pennsylvania as the focal region. The envelope model likely underestimated existing habitat due to its simplicity. Less than 5,000km2 of Pennsylvania was deemed habitat, an area that could support fewer than100 owls. The other models estimated that 50-60% of land cover both in Pennsylvania and across the eastern United States could be functional habitat. These estimates are likely more realistic for a generalist species like the barn owl. Given the breadth of the estimated habitat, populations should be more robust. It is more likely that a lack of nesting sites or a decline in prey numbers caused the present situation. Agricultural trends also favor increased pesticide use which would diminish prey populations as well as improved building conditions. This could remove potential nesting spots in the eaves of barns and silos. The acceptable temperature range does not extend into northern Pennsylvania, and nearing that range, survival necessitates increasingly sheltered nest sites, like buildings. A straightforward conservation approach would be placing artificial nesting boxes in areas of low pesticide use such as vineyards and organic farms.
Type
Master's project
Department
Nicholas School of the Environment and Earth Sciences
Subject
barn owl
Pennsylvania
distribution modeling
Tyto alba
Permalink
https://hdl.handle.net/10161/2228
Citation
Burtner, Alicia (2010). Conservation potential of barn owls (Tyto alba) in Pennsylvania. Master's project, Duke University. Retrieved from https://hdl.handle.net/10161/2228.
Collections
More Info
Show full item record