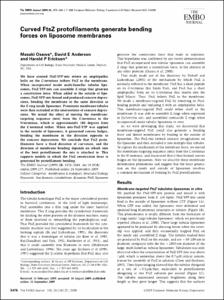 View / Download
7.2 Mb
Date
Authors
Osawa, Masaki
Anderson, David E
Erickson, Harold P
Repository Usage Stats
30
views
2
downloads
Abstract
We have created FtsZ-YFP-mts where an amphipathic helix on the C-terminus tethers FtsZ to the membrane. When incorporated inside multi-lamellar tubular liposomes, FtsZ-YFP-mts can assemble Z rings that generate a constriction force. When added to the outside of liposomes, FtsZ-YFP-mts bound and produced concave depressions, bending the membrane in the same direction as the Z ring inside liposomes. Prominent membrane tubules were then extruded at the intersections of concave depressions. We tested the effect of moving the membrane-targeting sequence (mts) from the C-terminus to the N-terminus, which is approximately 180 degrees from the C-terminal tether. When mts-FtsZ-YFP was applied to the outside of liposomes, it generated convex bulges, bending the membrane in the direction opposite to the concave depressions. We conclude that FtsZ protofilaments have a fixed direction of curvature, and the direction of membrane bending depends on which side of the bent protofilament the mts is attached to. This supports models in which the FtsZ constriction force is generated by protofilament bending.
Type
Journal article
Subject
Membranes
Cytoskeleton
Bacterial Proteins
Cytoskeletal Proteins
Liposomes
Protein Structure, Quaternary
Structure-Activity Relationship
Tensile Strength
Models, Biological
Models, Molecular
Torsion, Mechanical
Permalink
https://hdl.handle.net/10161/22300
Published Version (Please cite this version)
10.1038/emboj.2009.277
Publication Info
Osawa, Masaki; Anderson, David E; & Erickson, Harold P (2009). Curved FtsZ protofilaments generate bending forces on liposome membranes. The EMBO journal, 28(22). pp. 3476-3484. 10.1038/emboj.2009.277. Retrieved from https://hdl.handle.net/10161/22300.
This is constructed from limited available data and may be imprecise. To cite this article, please review & use the official citation provided by the journal.
Collections
More Info
Show full item record