911, Is There an Emergency? The Effects of Gentrification on 911 Calls in Durham, NC 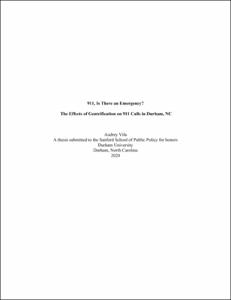 View / Download
1.3 Mb
Date
Author
Vila, Audrey
Advisor
Cook, Philip
Repository Usage Stats
243
views
107
downloads
Abstract
In recent years, urbanization in the United States has led to the displacement of low-income, minority communities for middle and high-income individuals, a process termed gentrification. Scholars debate the benefits and consequences of these changes for the existing populations. One possible effect is the changing of expectations and norms in city neighborhoods as the population shifts. Similarly, it raises questions about the interactions between new populations and existing residents. The following analysis uses urban block groups and Calls to Service data in Durham County between 2006 and 2018. According to established indicators of gentrification, Durham block groups are gentrifying within this time period with increased population, decreased Black populations, increased rent, increased education levels, and increased income. Importantly, the majority of Durham’s urban block groups are experiencing an influx of Hispanic residents, which is different from previous gentrification trends. Next, the paper assesses implications from previous literature that with population mixing, conflict from changing norms and perceptions would lead to increased conflict and result in greater use of the police for minor incidents. The paper uses simple linear regression with all indicators on a dependent variable that measures per capita call frequency. For 911 noise complaints, disturbances, alcohol and drug incidents, and suspicion calls, the regression results demonstrate that gentrification’s common indicators did not correlate with increased calls. The same result is found when focusing on block groups generally susceptible to the effects of gentrification. Therefore, the paper concludes that the city of Durham did not experience an increase in disturbance calls with gentrification as predicted by the literature, providing important information as the city continues to grow.
Type
Honors thesis
Department
Sanford School of Public Policy/Public Policy Studies
Subject
gentrification
crime
Durham
conflict
911 Calls
urbanization
Permalink
https://hdl.handle.net/10161/22349
Citation
Vila, Audrey (2021). 911, Is There an Emergency? The Effects of Gentrification on 911 Calls in Durham, NC. Honors thesis, Duke University. Retrieved from https://hdl.handle.net/10161/22349.
Collections
More Info
Show full item record