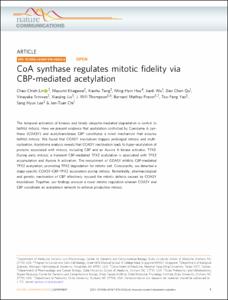 Research Professor of Pharmacology & Cancer Biology
The central focus of the lab is to understand how signaling pathway architecture and integration result in specific cell fates and how these properties have been hijacked in cancer cells. In particular, we are interested in assessing the extent to which cell-to-cell heterogeneity can affect the temporal dynamics and regulation of signaling pathways. We are focusing on the E2F/Rb network and have established a platform to follow in real time the activation and expression of E2F1 at the Assistant Research Professor of Pharmacology & Cancer Biology
Dr. Thompson's research focuses on the development and deployment of proteomics and metabolomics mass spectrometry techniques for the analysis of biological systems. He is the Assistant Director of the Proteomics and Metabolomics Shared Resource in the Duke School of Medicine. In this role, he enjoys utilizing mass spectrometry 'omics techniques in research collaborations with investigators throughout the Duke community. Professor of Pharmacology and Cancer Biology
My laboratory studies the regulatory functions of protein acetylation in cell signaling and human disease. We focus on a class of protein deacetylases, HDACs, which we have discovered versatile functions beyond gene transcription. We wish to use knowledge of HDAC biology to develop smart and rational clinical strategies for HDAC inhibitors, a growing class of compounds that show potent anti-tumor and other clinically relevant activities. Currently, there two major research major areas
Alphabetical list of authors with Scholars@Duke profiles.