Zen and the Body: A Postmodern Ascetic? Bodily Awakening in the Zen Memoirs of Shozan Jack Haubner 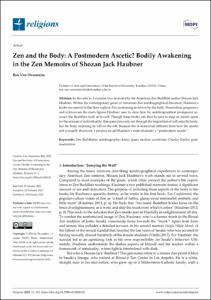 View / Download
287.2 Kb
Author
Van Overmeire, Ben
Repository Usage Stats
36
views
0
downloads
Abstract
<jats:p>In this article, I examine two memoirs by the American Zen Buddhist author Shozan Jack Haubner. Within the contemporary genre of American Zen autobiographical literature, Haubner’s books are special in that they explore Zen awakening as driven by the body. Penetration, pregnancy and sickness are the main figures Haubner uses to show how his autobiographical protagonist accesses the Buddhist truth of no-self. Though these books can thus be said to map an ascetic quest for the erasure of individuality, this quest proceeds not through the imposition of will onto the body, but the body imposing its will on the self. Because this is somewhat different from how the ascetic self is usually theorized, I propose to call Haubner’s main character a “postmodern ascetic”.</jats:p>
Type
Journal article
Permalink
https://hdl.handle.net/10161/22381
Published Version (Please cite this version)
10.3390/rel12020122
Publication Info
Van Overmeire, Ben (n.d.). Zen and the Body: A Postmodern Ascetic? Bodily Awakening in the Zen Memoirs of Shozan Jack Haubner. Religions, 12(2). pp. 122-122. 10.3390/rel12020122. Retrieved from https://hdl.handle.net/10161/22381.
This is constructed from limited available data and may be imprecise. To cite this article, please review & use the official citation provided by the journal.
Collections
More Info
Show full item record Assistant Professorof Religious Studies at Duke Kunshan University
Hi, I’m Ben Van Overmeire. Currently, I’m Assistant Professor of Religious Studies at Duke Kunshan University. I’m working on a book on how modern autobiographical narratives of Zen life incorporate koan, medieval Zen riddles such as &ldquo;What is the sound of one hand clapping?&rdquo; or &ldquo;What was your name before you were born?&rdquo; My work has appeared in Religions, Contemporary Buddhism, The Journal of the Buddhist-Christian Studies S