The Exhortation to Penitence: Machiavelli’s Criticism of the Church 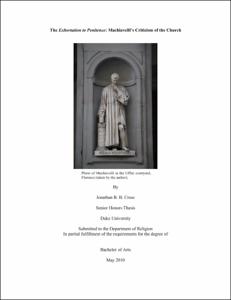 View / Download
29.9 Mb
Date
Author
Cross, Jonathan
Repository Usage Stats
1,778
views
595
downloads
Abstract
Isaiah Berlin has observed, “there is something surprising about the sheer number of interpretations of Machiavelli’s political opinions.” For Niccolò Machiavelli (1469-1527), religion and politics were intimately connected activities; his views on religion were integral to his political opinions. Consequently, Machiavelli’s views on religion, and his assessment of Christianity in particular, have captured the attention of nearly every scholar of the great Florentine thinker and have produced a multitude of interpretations. This plethora of interpretations is due to the variety and complexity of Machiavelli’s thought, to which Dante Germino confessed, “I do not think that there exists a Rosetta stone to decipher the Machiavellian hieroglyph.” Although this investigation will not propose a template with which to elucidate Machiavelli’s thought, it will address his views on religion and more specifically, his criticisms of the Renaissance Italian Church. In the corpus of Machiavelli’s literature there is one text that has received scant scholarly attention, his Exhortation to Penitence (Esortazione alla Penitenza). This pithy sermon was probably composed and delivered to a religious confraternity in the last years of Machiavelli’s life, sometime between 1525 and 1527. However, given the dearth of records it is possible that Machiavelli presented his sermon earlier in his life, meaning that contextualizing the sermon against the background of Italian events—invasions as well as internal strife—is problematic. This investigation will examine the extent to which the content of the Exhortation is an echo of Machiavelli’s other literature and ideas, or is instead just a minor, anomalous work. The node of comparison will be Machiavelli’s criticism of the Italian Church; specifically, that the Church has failed to stem ingratitude (towards God as well as towards one’s neighbor), and that it has inculcated sloth (the failure to participate civically in social and political affairs) in the Italian populace.
Type
Honors thesis
Department
Religion
Subject
Machiavelli
Exhortation
Religion
Ingratitude
Sloth
Discourses
Permalink
https://hdl.handle.net/10161/2242
Citation
Cross, Jonathan (2010). The Exhortation to Penitence: Machiavelli’s Criticism of the Church. Honors thesis, Duke University. Retrieved from https://hdl.handle.net/10161/2242.
Collections
More Info
Show full item record