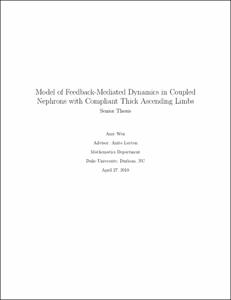 View / Download
410.2 Kb
Date
Author
Wen, Amy
Repository Usage Stats
362
views
268
downloads
Abstract
Irregular flow and pressure have been observed in the nephrons of spontaneously hypertensive rats (SHR). Coupling of nephrons through their tubuloglomerular feedback (TGF) systems may be one of the factors involved in this phenomenon. To increase understanding of the effects due to coupling, a mathematical model was created for bifurcation analysis. This study was inspired by previous models that investigated coupled nephrons in the case of a rigid thick ascending limb (TAL) and single nephrons in the case of a compliant TAL. In the present study, a model of coupled nephrons with compliant TALs is developed. From this model, we have derived a characteristic equation for a system of coupled nephrons. Analysis of the solutions to this characteristic equation for the case of two identical coupled nephrons has revealed that TGF systems with coupling are more prone to oscillate, which could lead to the complex behavior found in SHR.
Type
Honors thesis
Department
Mathematics
Subject
Tubuloglomerular feedback
Coupled nephrons
Compliant thick ascending limb
Permalink
https://hdl.handle.net/10161/2243
Citation
Wen, Amy (2010). Model of Feedback-Mediated Dynamics in Coupled Nephrons with Compliant Thick Ascending Limbs. Honors thesis, Duke University. Retrieved from https://hdl.handle.net/10161/2243.
Collections
More Info
Show full item record