From Crime to Coercion: Policing Dissent in Abeokuta, Nigeria, 1900–1940 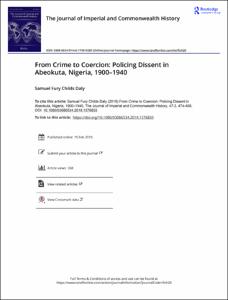 View / Download
1.4 Mb
Date
Author
Daly, SFC
Repository Usage Stats
20
views
64
downloads
Abstract
© 2019, © 2019 Informa UK Limited, trading as Taylor & Francis Group. Indirect rule figured prominently in Nigeria’s colonial administration, but historians understand more about the abstract tenets of this administrative strategy than they do about its everyday implementation. This article investigates the early history of the Native Authority Police Force in the town of Abeokuta in order to trace a larger move towards coercive forms of administration in the early twentieth century. In this period the police in Abeokuta developed from a primarily civil force tasked with managing crime in the rapidly growing town, into a political implement of the colonial government. It became critical in preserving the authority of both the local traditional ruler and the colonial administration behind him. In Abeokuta, this transition was largely precipitated by the 1918 Adubi War and the period of increased surveillance that followed it. This created new responsibilities and powers for the police, expanding their role in Abeokuta’s administration and raising their stock in the colonial administrative hierarchy.
Type
Journal article
Subject
Nigeria
Abeokuta
crime
police
indirect rule
Permalink
https://hdl.handle.net/10161/22436
Published Version (Please cite this version)
10.1080/03086534.2019.1576833
Publication Info
Daly, SFC (2019). From Crime to Coercion: Policing Dissent in Abeokuta, Nigeria, 1900–1940. Journal of Imperial and Commonwealth History, 47(3). pp. 474-489. 10.1080/03086534.2019.1576833. Retrieved from https://hdl.handle.net/10161/22436.
This is constructed from limited available data and may be imprecise. To cite this article, please review & use the official citation provided by the journal.
Collections
More Info
Show full item record