Classification of Legendrian Knots and Links 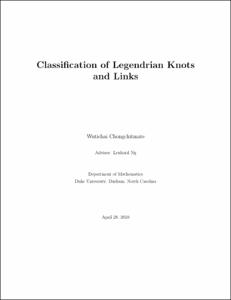 View / Download
4.9 Mb
Date
Author
Chongchitmate, Wutichai
Repository Usage Stats
314
views
505
downloads
Abstract
We write a program in Java to generate all grid diagrams of up to size 10. Using equivalence between grid diagrams modulo a set of Cromwell moves and classification of Legendrian links up to Legendrian isotopy, together with various topological, Legendrian and transverse invariants for knots and links, we classify Legendrian knots and links of arc index up to 9. The main result of this paper consists of two atlases, a Legendrian knot atlas and an atlas for unoriented Legendrian two-component links. In the Legendrian knot atlas, we give information on each Legendrian knot together with conjecture for a mountain range for each knot type. The Legendrian knot atlas illustrates several interesting phenomena such as unusual mountain ranges and transversely non-simple knots. Prior to this paper, such phenomenon was found only in knots with very large number of crossings. The atlas for unoriented Legendrian two-component links also gives information on each unoriented Legendrian link, together with conjecture for its Thurston-Bennequin polytope for each link type. Our result can answer the question posted by Baader and Ishikawa that whether the tb polytope can always be described by the three linear inequalities.
Type
Honors thesis
Department
Mathematics
Subject
Legendrian knot
Legendrian link
Grid diagram
Classification
Permalink
https://hdl.handle.net/10161/2244
Citation
Chongchitmate, Wutichai (2010). Classification of Legendrian Knots and Links. Honors thesis, Duke University. Retrieved from https://hdl.handle.net/10161/2244.
Collections
More Info
Show full item record