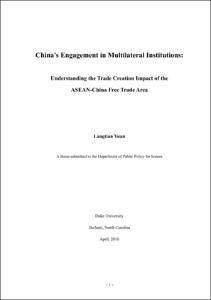 View / Download
361.7 Kb
Date
Author
Yuan, Langtian
Repository Usage Stats
874
views
2,687
downloads
Abstract
Over the past two decades, the rise of China has caused profound changes in the traditional underpinnings of international relations in Asia. China’s speedy economic development and military modernization led to heightened competition and conflicts with fellow East Asian countries in the late 1980s and early 1990s that caused many scholars and policy experts to become concerned with the nature of its rise to power. These concerns evolved into the great “engagement” versus “containment” debate in the 1990s regarding whether to engage or isolate the fledgling power during its ascension. Whether the international community is able to find a proper incentive that leads to the incorporation of China in the regional and international multilateral framework seemed to be the central question of the debate. Since the early 2000s, however, the Chinese government has implemented a series of liberal policy reforms regarding international relations which significantly improved its diplomatic relations with its neighbors and reassured the rest of the world of the benign nature of its rise to power. In particular, China’s increasing engagement in regional multilateral institutions surprised many western policy makers who have traditionally considered China’s hostile and suspicious attitude toward such institutions one of the major destabilizing factors in its rise to power. One prominent example of China’s increasing influence in regional multilateral institutions is its role behind the creation and implementation of the ASEAN-China Free Trade Area (ACFTA). Conceived in 2002, ACFTA seeks to promote regional economic cooperation through the gradual removal of trade barriers and unification of rules and economic practices in East Asia. With the 2010 deadline for the FTA’s implementation process fast approaching, the paper seeks determine the economic value of ACFTA through the application of the gravity model of trade. In particular, it hopes to answer the question whether ACFTA functions as an effective instrument promoting regional trade or merely serves to reinforce preexisting economic norms. Through the finding, the paper also hopes to offer some insights onto the question of whether China’s newfound enthusiasm in partaking in regional economic cooperation is paralleled by actual effective economic reforms. The empirical results from the gravity model are inconclusive on the trade creation aspect of ACFTA. However, analysis of other empirical data, including a closer inspection of specific ACFTA policies, do suggest that the FTA accomplished more than simply reinforcing preexisting economic norms. Moreover, the study of China’s leadership role behind the creation of ACFTA serve to reflect the new sophistication and confidence behind Beijing’s foreign policy and its altered attitude toward multilateral institutions. At the same time, it is important to note that China’s avid engagement in regional multilateral institutions and willingness to compromise in certain negotiations do not imply a full acceptance of regional cooperation and integration. There remains a great amount of uncertainty around the question of whether the recent patterns of economic cooperation are indicative of a permanent shift in the basic preferences of the Chinese government that can have long-term impact.
Type
Honors thesis
Department
Public Policy Studies
Subject
China
ASEAN
International Trade
Multilateral Institutions
ACFTA
Permalink
https://hdl.handle.net/10161/2249
Citation
Yuan, Langtian (2010). China's Engagement in Multilateral Institutions: Understanding the Trade Creation Impact of the ASEAN-China Free Trade Area. Honors thesis, Duke University. Retrieved from https://hdl.handle.net/10161/2249.
Collections
More Info
Show full item record