The AKP's Rhetoric of Rule in Turkey: Political Melodramas of Conspiracy from "Ergenekon" to "Mastermind" 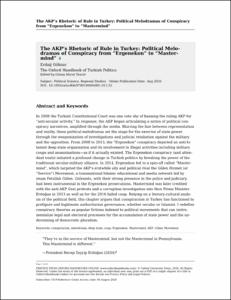 View / Download
282.0 Kb
Author
Göknar, Erdag
Editor
Tezcür, Güneş Murat
Repository Usage Stats
25
views
2
downloads
Abstract
In 2008 the Turkish Constitutional Court was one vote shy of banning the ruling AKP for “anti-secular activity.” In response, the AKP began articulating a series of political conspiracy narratives, amplified through the media. Blurring the line between representation and reality, these political melodramas set the stage for the exercise of state power through the weaponization of investigations and judicial retaliation against the military and the opposition. From 2008 to 2013, the “Ergenekon” conspiracy depicted an anti-Islamist deep state organization and its involvement in illegal activities including military coups and assassinations—as if it actually existed. The Ergenekon conspiracy (and attendant trials) initiated a profound change in Turkish politics by breaking the power of the traditional secular-military alliance. In 2014, Ergenekon led to a spin-off called “Mastermind”, which targeted the AKP’s erstwhile ally and political rival the Gülen Hizmet (or “Service”) Movement, a transnational Islamic educational and media network led by imam Fetullah Gülen. Gülenists, with their strong presence in the police and judiciary, had been instrumental in the Ergenekon prosecutions. Mastermind was later credited with the anti-AKP Gezi protests and a corruption investigation into then Prime Minister Erdoğan in 2013 as well as for the 2016 failed coup. Relying on a literary-cultural analysis of the political field, this chapter argues that conspiracism in Turkey has functioned to prefigure and legitimate authoritarian governance, whether secular or Islamist. I redefine conspiracy theories as popular fictions indexed to political movements that can instrumentalize legal and electoral processes for the accumulation of state power and the undermining of democratic pluralism.
Type
Other article
Permalink
https://hdl.handle.net/10161/22556
Citation
Göknar, Erdag (n.d.). The AKP's Rhetoric of Rule in Turkey: Political Melodramas of Conspiracy from "Ergenekon" to "Mastermind". Retrieved from https://hdl.handle.net/10161/22556.
Collections
More Info
Show full item record