Functional and Evolutionary Genetics of a Wild Baboon Population 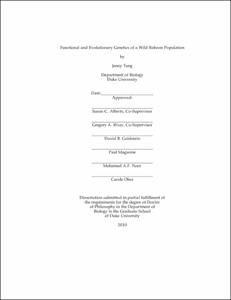 Although evolution results from differential reproduction and survival at the level of the individual, most research in evolutionary genetics is concerned with comparisons made at the level of divergent populations or species. This is particularly true in work focused on the evolutionary genetics of natural populations. While this level of inquiry is extremely valuable, in order to develop a complete understanding of the evolutionary process we also need to understand how traits evolve within populations, on the level of differences between individuals, and in the context of natural ecological and environmental variation. A major difficulty confronting such work stems from the difficulty of assessing interindividual phenotypic variation and its sources within natural populations. This level of inquiry is, however, the main focus for many long-term field studies. Here, I take advantage of one such field study, centered on the wild baboon population of the Amboseli basin, Kenya, to investigate the possibilities for integrating functional, population, and evolutionary genetic approaches with behavioral, ecological, and environmental data. First, I describe patterns of hybridization and admixture in the Amboseli population, a potentially important component of population structure. Second, I combine field sampling, laboratory measurements of gene expression, and a computational approach to examine the possibility of using allele-specific gene expression as a tool to study functional regulatory variation in natural populations. Finally, I outline an example of how these and other methods can be used to understand the relationship between genetic variation and naturally occurring infection by a malaria-like parasite, Hepatocystis, also in the Amboseli baboons. The results of this work emphasize that developing genetic approaches for nonmodel genetic systems is becoming increasingly feasible, thus opening the door to pursuing such studies in behavioral and ecological model systems that provide a broader framework for genetic results. Integrating behavioral, ecological, and genetic perspectives will allow us to better appreciate the interplay between these different factors, and thus achieve a better understanding of the raw material upon which selection acts.