The Spatial Unconscious of Global America: A Cartography of Contemporary Social Space and Cultural Forms 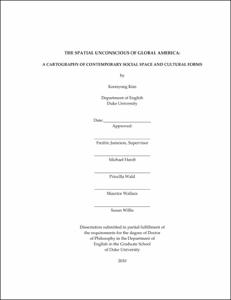 This dissertation examines space as a privileged yet <italic>repressed</italic> site of cultural production in a global America, in response to ongoing attempts to reconfigure American literary and cultural studies through the lens of globalization, postnationality, worlding, and planetarity, and to build conversations between literature, the arts, and space. Drawing its inspiration from Henri Lefebvre's work on the production of social space and Fredric Jameson's theory of postmodern global culture, this project studies globalization with a particular emphasis on its unique spatial apparatus, which through geographical expansion and contraction and worldwide connection and disconnection produces hitherto unprecedented social spaces, including most notably the global city, virtual space, transnational diasporas, postmodern architecture, and the "non-places" of shopping malls, airports, and highways. I discuss how these global social spaces radically alter our experience of the lifeworld (<italic>Lebenswelt</italic>) and transform our representational practices, by analyzing innovative contemporary cultural forms such as literary theory (Jameson, Derrida, Adorno, and Deleuze), deconstructive architecture (Peter Eisenman), video art (Nam June Paik), diasporic writing (Theresa Hak Kyung Cha), postmodern detective fiction (Paul Auster), the cyberpunk novel (William Gibson).

While I thus mediate global spatial production and cultural production, I argue that the predominant focus on deterritorialization, disjuncture, and postspatiality in much of contemporary discourse on globalization oftentimes diverts our attention from the complex mechanism whereby the spatial world system of globalization brings the entire globe into its all-encompassing and totalizing force field. I formulate the concept of a <italic>spatial unconscious</italic> in order to address the salient, though repressed, presence of the totalizing spatial logic of global capitalism that underlies contemporary cultural production. In so doing, I demonstrate that diverse contemporary literary and cultural forms have their conditions of possibility the newly emergent global spatial network of cultural flows and exchanges; and that those literary and cultural forms function as symbolic acts or registering apparatuses that reflect, remap, and reimagine the multifaceted and even contradictory spatial configurations of the world today. By bringing a transnational and interdisciplinary perspective to American literary studies, this study seeks to shift our critical attention from a putatively unitary and homogeneous national literature towards manifold cultural loci crisscrossed by dynamic interplays and fluid interchanges amongst multiple axes and nodal points on the globe.