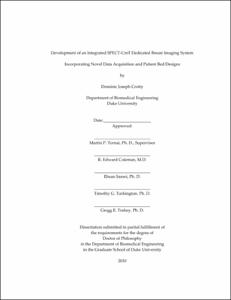 This thesis research builds upon prior work that developed separate SPECT and CT (computed mammotomography, or breast CT) devices that were independently capable of imaging an uncompressed breast in 3D space. To further develop the system as a clinically viable device, it was necessary to integrate the separate imaging systems onto a single gantry, and to simultaneously design a patient-friendly bed that could routinely and effectively position the patient during dual-modality imaging of her uncompressed breast in the system's common field of view. This thesis describes this process and also investigates practical challenges associated with dedicated breast imaging of a prone patient using the integrated SPECT-CT device.

We initially characterized the practicability of implementing the novel x-ray beam ultra-thick K-edge filtration scheme designed for routine use with the breast CT system. Extensive computer simulations and physical measurements were performed to characterize the x-ray beam produced using K-edge filtration with cerium and to compare it to beams produced using other filtration methods and materials. The advantages of using this heavily filtered x-ray beam for uncompressed breast CT imaging were then further evaluated by measuring the dose absorbed by an uncompressed cadaver breast during the course of a routine tomographic scan. It was found that the breast CT device is indeed capable of imaging uncompressed breasts at dose levels below that of the maximum utilized for dual-view screening mammography.

To prepare the separate SPECT and CT systems for integration onto a single platform, the cross contamination of the image of one modality by primary and scattered photons of the complementary modality was quantified. It was found that contamination levels of the emission (SPECT) image by the x-ray transmission source were generally far less than 2% when using photopeak energy windows up to ±8%. In addition, while there was some quantifiable evidence of a variation in the transmission image in response to the presence of <super>99m</super>Tc photons in the patient, the effect of primary and scattered <super>99m</super>Tc photons on the visibility of 5 mm acrylic photons in a low contrast x-ray transmission environment was negligible.

A novel, tiered, stainless steel patient bed was then designed to allow dual-modality imaging using the integrated SPECT-CT system. The performance of the hybrid SPECT-CT system was evaluated during early stage dual-modality patient imaging trials with particular emphasis placed on the performance of the patient bed. The bed was successful in its primary task of enabling dual-modality imaging of a patient's breast in the common field of view, but practical challenges to more effective patient imaging were identified as well as some novel solutions to these challenges.

In the final section of the thesis research, the feasibility of using two of these solutions was investigated with a view to imaging more of the patient's posterior breast volume. Limited angle tomographic trajectories and trajectories that involve raising or lowering the patient bed in mid tomographic acquisition were initially investigated using various geometric phantoms. A very low contrast imaging task was then tested using an observer study to quantify the effect of these trajectories on the ability of observers to maintain visibility of small geometric objects.

This initial integrated SPECT-CT imaging system has demonstrated its ability to successfully perform low dose, dual-modality imaging of the uncompressed breast. Challenges and solutions have been identified here that will make future SPECT-CT designs even more powerful and a clinically relevant technique for molecular imaging of the breast.