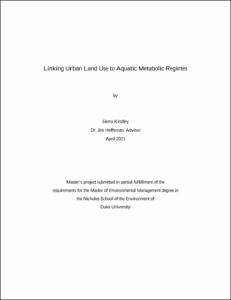 View / Download
976.7 Kb
Date
Author
Kindley, Sierra
Advisor
Heffernan, Jim
Repository Usage Stats
95
views
28
downloads
Abstract
Metabolism is a foundational property of ecosystems, and the productivity of rivers determines their capacity to retain and transform nutrients as well as support biodiversity. Stream metabolism has been increasingly used to assess waterway health due to its relevance across sizes and types of streams, sensitivity to stressors, and ability to be measured continuously. Land use change can affect metabolism through numerous mechanisms, including hydrology, light regimes, and nutrients, which may respond to changes in land use at different scales. This study used existing high frequency metabolism records and geospatial data to examine relationships among measures of catchment and riparian condition and stream Gross Primary Production (GPP). The primary goals were to identify the mechanisms by which urbanization and land use change affect metabolism, the scales at which these drivers exert the most influence, and any variance present across regions. Quantifiable proxies for each mechanism were used to characterize and assess its effect on GPP response along an urban land use gradient and spatial scale. This study focused on small headwater streams located in mesic environments. The study area for this project included a collection of stream gage sites in the eastern United States, each of which is located east of 96 degrees west longitude and has a total catchment area of less than 26 square kilometers. Four primary regions of focus were selected based on their display of a complete urban gradient (low total percent urban area to high total percent urban area within the catchment) among stream gage sites: Atlanta metropolitan area, Kansas City metropolitan area, Mid-Atlantic region, and Washington D.C. metropolitan area. Overall, we found that watershed scale urban cover was weakly correlated with stream characteristics that affect metabolism. Total percent tree canopy cover appears to exert control over metabolism at the local reach scale, while total percent urban land cover, total percent imperviousness, and total road density do this at the whole watershed scale. In all cases, GPP was negligible above a threshold land cover, and the higher variance in GPP at low to moderate urbanization levels is controlled by local canopy. This suggests that metabolic regimes arise from processes at multiple scales. Differences in GPP among the four focal regions are likely due to differences in climate, impervious surface, and riparian canopy among urban areas. These findings suggest that effective interventions may require catchment scale efforts to preserve and restore hydrologic regimes as well as local interventions to improve riparian condition. This has implications for resource protection, mitigation, and future planning. Understanding the relative importance of these processes and the scales at which they affect streams is critical for environmental management decisions, including the conservation and rehabilitation of streams, as well as designing appropriate interventions. Ultimately, this project demonstrates how richer and larger datasets can expand our understanding and inform decision making at new scales. Future temporal scale analyses that assess the seasonality or disturbance recovery trajectories of these data may further benefit our understanding of these processes and relationships. Additionally, we suggest conducting comparative analyses of these data in terms of seasonal patterns and how temporal patterns differ between GPP and ecosystem respiration (ER).
Type
Master's project
Department
Nicholas School of the Environment and Earth Sciences
Subject
metabolism
land use
urban streams
productivity
urbanization
Permalink
https://hdl.handle.net/10161/22704
Citation
Kindley, Sierra (2021). Linking Urban Land Use to Aquatic Metabolic Regimes. Master's project, Duke University. Retrieved from https://hdl.handle.net/10161/22704.
Collections
More Info
Show full item record