Sons, Seed, and Children of Promise in Galatians: Discerning the Coherence in Paul's Model of Abrahamic Descent 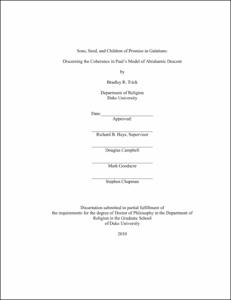 The central portion of Paul's letter to the Galatians consists of three main arguments, each of which invokes a different image of Abrahamic descent: sons (3:7) in 3:6-14, seed (3:16, 29) in 3:15-4:11, and children of promise (4:28) in 4:21-5:1. Current interpretations of these Abrahamic appeals typically portray them as logically problematical, collectively inconsistent, and/or generally unpersuasive, a situation that then leads most scholars to identify them as <italic>ad hoc</italic> responses to the Galatian agitators. This inability to find a coherent model of Abrahamic descent in Galatians, however, threatens to undermine the very gospel itself by suggesting that it cannot effectively counter a Judaizing call that derives from a simple appeal to Abraham.

This dissertation argues that Paul does indeed present the Galatians with a coherent account of Abrahamic descent that accords with his persuasive intent of refuting a law-based circumcision. Its key insight lies in the suggestion that Paul understands the Abrahamic <italic>diatheke</italic> in 3:15-18 as akin to a Hellenistic adoptive testament. As a result, the promised Abrahamic seed must be both a son of Abraham and, because of Abraham's divine adoption through the <italic>diatheke</italic>, a son of God, hence Paul's identification of Christ as Abraham's sole seed (3:16).

This twofold nature of the Abrahamic seed then suggests a distinction in Paul's other terms for Abrahamic descent. The dissertation accordingly contends that "sons of Abraham" in 3:7 designates, as it typically did in the mid-first century C.E., the Jews, i.e., those physical descendants of Abraham who also share his faith. In contrast, "children of promise" in 4:28 designates gentiles who have through faith received the Abrahamic blessing, i.e., the Spirit of sonship that makes them children of God. Each group thus requires incorporation into Christ to establish their status as Abrahamic seed: the Jews so that they might share in the gentiles' divine sonship, the gentiles so that they might share in the Jews' Abrahamic sonship. This interdependent union of the Jewish sons of Abraham and the gentile sons of God in Christ then constitutes the single divine Abrahamic seed who inherits (3:29).

Paul employs this model to refute the necessity of law observance as follows. In 3:6-14, he argues that Christ's accursed death on the cross divides faith from law observance as a means of justification for Jews; the full sons of Abraham accordingly become those Jews who, by dying to the law and embracing Christ, exhibit the same radical trust in God as their forefather exhibited. In 3:15-4:11, he argues that God added the law and its curse to ensure that the Jews could not receive the Abrahamic blessing promised to the nations--i.e., the Spirit that would make the Jews sons of God and, thus, Abrahamic seed--apart from the one seed, Christ. Finally, in 4:21-5:1, he argues that, like Hagar, the non-adoptive Sinaitic <italic>diatheke</italic> produces Abrahamic descendants (i.e., non-Christian Jews) who share the general human enslavement to the <italic>stoicheia</italic>, whereas the adoptive Abrahamic <italic>diatheke</italic> produces Abrahamic descendants (i.e., Christian Jews) whose divine adoption frees them from this enslavement. Each appeal to Abraham thus undermines the gentile Christians' motivation for submitting to the law by demonstrating that Jewish Christians do not even remain under the law.