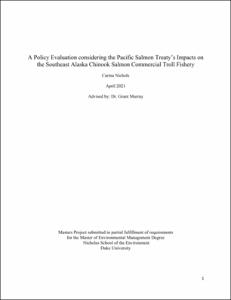 View / Download
4.5 Mb
Date
Author
Nichols, Carina
Advisor
Murray, Grant
Repository Usage Stats
120
views
334
downloads
Abstract
Conflicts regarding salmon harvest and conservation have been intensified by the highly migratory nature of the species often moving between the Pacific Northwest, British Columbia, and Alaska. Pacific salmon stocks migrate across international boundaries to rear and mature before returning to their river of origin to spawn. Consequently, salmon that spawned in the rivers of one country are subject to interceptions in another country. Negotiated in 1985 between Canada and the U.S., the Pacific Salmon Treaty represents decades of effort toward collaborative management to prevent overfishing and to provide for the optimum production and fair allocation of salmon harvest for Pacific salmon fisheries. This report broadly seeks to understand the impacts international fishery agreements have had on small-scale, community-based fisheries through a case study evaluating the Pacific Salmon Treaty’s impacts on the Southeast Alaska commercial Chinook salmon troll fishery over time. The Southeast Alaska Chinook salmon commercial troll fishery was selected due to its dependence on Chinook salmon as a substantial component of its harvest, as along with the small boat characteristics of the fishery. Chinook salmon negotiations within the Pacific Salmon Treaty have been a chronic source of tension within negotiations, and the impacts of negotiations for the Southeast Alaska Chinook salmon commercial troll fishery have resulted in dramatic reductions in harvest opportunity. Reductions in harvest have not been offset by increased consumer demand and fish prices, although these have increased over time. Domestic rivalry is apparent between Alaska and the southern U.S., and Endangered Species Act listings have further complicated negotiations and U.S. Section relations. The report concludes with policy conclusions and recommendations intended to improve salmon management and impacts to affected stakeholders. Concluding that management actions beyond fishery harvest controls will likely be necessary to support healthy salmon populations, consideration of approaches to salmon conservation outside of Pacific Salmon Treaty jurisdiction is recommended. Recommendations also include improved process transparency, the development of a framework to evaluate long-term impacts to stakeholders resulting from management decisions, and increased accountability to maintain habitat responsibly and for the benefit of all.
Type
Master's project
Department
Nicholas School of the Environment and Earth Sciences
Subject
Salmon
International agreements
Fishery Management
Permalink
https://hdl.handle.net/10161/22713
Citation
Nichols, Carina (2021). A Policy Evaluation considering the Pacific Salmon Treaty’s Impacts on the Southeast Alaska Chinook Salmon Commercial Troll Fishery. Master's project, Duke University. Retrieved from https://hdl.handle.net/10161/22713.
Collections
More Info
Show full item record