Identification of Novel Imprinted Domains in the Therian Lineage 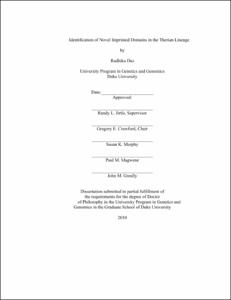 Genomic imprinting is the parent-of-origin dependent monoallelic expression of select developmentally important genes that are regulated by epigenetic mechanisms. It is believed to have co-evolved with placentation in the Therian lineage, but it is unclear whether this phenomenon arose in a convergent or divergent manner in the Metatherians (those with a rudimentary placenta) and Eutherians (true placental mammals). Moreover, the precise epigenetic mechanisms involved in establishing genomic imprinting (DNA methylation or histone modifications) are still poorly defined. Thus, I studied Metatherian orthologues of Eutherian imprinted loci using Monodelphis domestica as a model organism. L3MBTL and HTR2A were monoallelically expressed; PEG1/MEST had one imprinted and one non-imprinted transcript, while IMPACT, COPG2 and PLAGL1 were not imprinted, thus revealing that this phenomenon is conserved at some, but not all loci between the two groups of Therians. Moreover, differential methylation patterns and the associated regulatory non-coding RNA are also not conserved amongst them, exemplified by the novel DMR identified within IGF2R which had no associated anti-sense transcript. However, histone modifications, specifically the activating H3 Lysine 4 dimethylation mark at the active allele's promoter seems to be important in both lineages and probably serves as the primordial imprint mark. Although the evidence does not resolve the issue of convergence or divergence, it raises the intriguing possibility that both forms of evolution occurred during establishment of imprinting in these mammals.

The imposition of functional haploidy in the genome by such epigenetic mechanisms necessarily makes imprinted genes more susceptible to deleterious mutations and regulatory perturbations. Thus, imprinting is implicated in a number of developmental disorders, but its role in the etiology of complex human diseases and neurological disorders, like autism and schizophrenia, remains to be determined. I chose to investigate the imprint status of the duplicated locus DGCR6/DGCR6L lying within the 22q11.2 microdeletion causative of DiGeorge Syndrome (DGS), because our lab previously predicted genes at this genomic location to be imprinted. My studies revealed that both genes DGCR6 and DGCR6L are monoallelically expressed in the primate lineage, but not in a parent-of-origin dependent manner. Interestingly, DGCR6L is not present in the mouse, and Dgcr6 is expressed from both parental alleles.

Although DGS primarily manifests as facial, limb and heart abnormalities in children, a number of these patients also ultimately present with variable neurocognitive defects. Thus, I focused my studies on determining the effect of the microdeletion at this chromosomal region on DGCR6 and DGCR6L expression because of their potential role in neural crest cell migration. This revealed that DGS subjects have a highly dysregulated pattern of DGCR6 and DGCR6L expression as compared to that in controls. Moreover, increased expression of these genes correlated significantly with decreased performance in sustained-attention tests. This provides the first evidence that disruption of the normal monoallelic expression pattern of DGCR6 and DGCR6L by hemizygous deletion is involved in the variability in neurocognitive symptoms associated with DiGeorge Syndrome. The results of my studies highlight the importance of searching for novel imprinted domains to better understand not only their evolution, but also the potential role of such epigenetically labile regions in modulating complex human diseases and neurological disorders.